Issue 149 of 2000 AD was published 26 January, 1980. It cost the tiny pittance of 12 pence Earth money. I write a lot of posts about 2000 AD because reading it was a very formative experience for me, and I still read it today. I have a 2000 AD page where I link to all the issues I have talked about on this site, and I've also written a book collecting the posts. 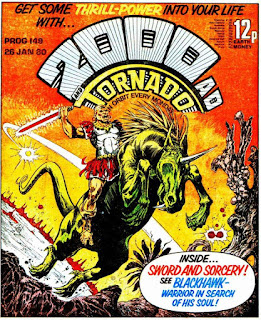 The cover features Blackhawk, a dud character inherited by 2000 AD when it took over Tornado. It is drawn by Massimo Belardinelli, and it is quite something. Blackhawk is rifing on the back of one of Belardinelli’s usual extremely fanciful aliens. This one is a green unicorn with no eyes, porcupine quills for a mane, and clawed hands instead of feet. It is ridiculous, but it is drawn with commitment and detail, and... works... I think... kind of. It even makes the turgid shenanigans of the Blackhawk story look interesting. 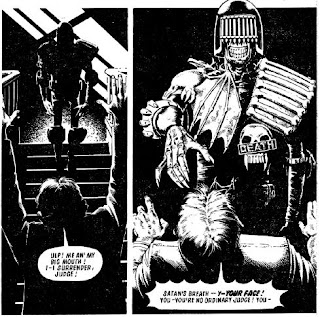 Judge Dredd is the first strip, in a story called Judge Death, by John Wagner with art by Brian Bolland. This is a landmark issue because it sees the introduction of Judge Death, who proved hugely popular with the readership almost instantly. I was never a fan, I have to admit. The idea of an alien being sentencing a city to death is intriguing, but his costume is ridiculous. The bones on the left shoulder, the pterodactyl on the right, and the claws on the elbow pads make him look like a Halloween decoration. Dredd himself comments on how the costume Judge Death is wearing is a mockery of a judge’s uniform.


As usual with Bolland, you get very disciplined drawings of foreground figures, such as Judge Death himself, with not a hell of a lot going on in the background, but that fits this noir cum B-movie slasher of a strip very well. Like any supernatural, horror monster, Judge Death has an array of paranormal powers. He can kill by reaching into an individual's chest and squeezing. He may have been dead for centuries, and he is immune to bullets. The story ends with the reveal that Judge Death can not be killed, which makes for a very effective and powerful cliffhanger. As I said, I’m not a huge fan of this character, but I admit enjoying Judge Death’s introduction in this atmospheric story. Maybe he’ll grow on me.

The V.C.'s is once again underwhelming this issue, with an entire episode dedicated to the main characters fighting an entire army of faceless enemy and winning. The enemy are called geeks, which is a clear reference to a racial epithet used during the Vietnam War. It’s distasteful and it’s so dull that I gave up on it half way through. With art by Garry Leach, instead of the amazing Cam Kennedy, there really isn’t anything here to hold the attention. 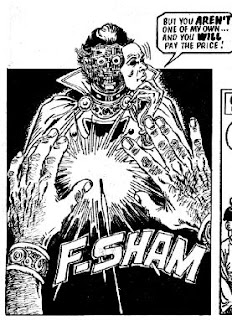 After the V.C.s, the Ro-Jaws’ Robo-Tale from last week continues. It’s title is It's a Knockout, and it is by Oleh, with art by Jose Casanovas. In the story, a robot and a human are challenging each other in some kind of competition. Strangely, somebody’s life is at stake. The person staking their life turns out to be a West World-style android, however, and turns the tables on the bad guy. The whole thing is a kind of fable told to humans by robots to get them to be nicer to their droids. Be good to your robot, or the Stranger will come for you. The strip gets its name from a British TV series first broadcast on BBC1 in 1966. It featured teams representing a town or city competing in absurd games, generally dressed in large foam rubber suits. Games were played in the home town's park, with weather often turning grassland into mud. Limited budgets meant games were often a variation on what could be done with a long piece of elastic, a lot of water, a portable swimming pool and a roundabout. The winner of each edition was awarded an It's a Knockout trophy and a chance to represent the UK in the European finals. 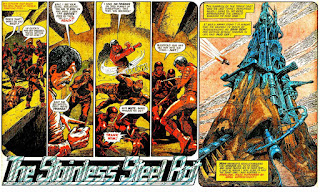 The adaptation of The Stainless Steel Rat by Harry Harrison, and adapted by Kelvin Gosnell, with art by Carlos Ezquerra, is next. In the story, Slippery Jim de Griz is busted out of prison and inducted into the resistance. He certainly leads an action packed life. 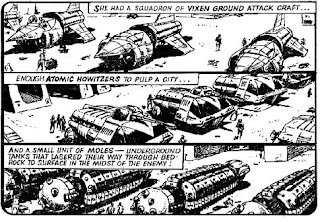 And we get some nice tantalizing glimpses of some of the hardware the resistance has. The story is given the coveted central spot, where it has two pages of color art. It makes very good use of it, with some atmospheric action, and a wonderful establishing shot of a rebel base. 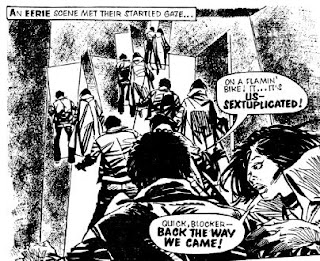 Timequake by Chris Lowder, with art by Jesus Redondo, is next, and it is very intriguing. I like the way time itself is being used as a backdrop here, rather than time travel being used to put the characters in various historic periods. Timequake is probably one of the weakest strips that came to 2000 AD when it merged with Starlord, but this isn’t a bad episode of it.
Captain Klep by Dave Angus, with art by Robin Smith, which is the next story, is just terrible, as usual. The only good thing that can be said for it is that it is only one page in length. 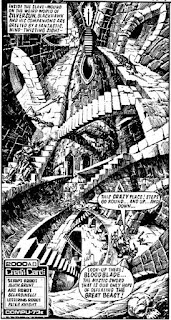 The final strip is Blackhawk, and as you might guess from the cover, it doesn’t make a lot of sense. It is pretty generic fantasy stuff, this episode, but Belardinelli is really outdoing himself here with the dungeon detail and whimsical aliens Blackhawk encounters. It may not make much sense, but it is beautiful to look at. 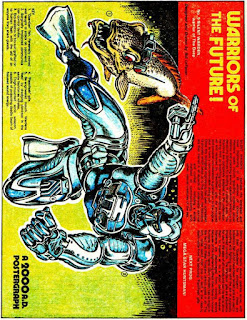 And there is more beautiful art on the back cover. I really like these colorful ‘Warrior of the Future’ images. I wish 2000 AD had taken the idea and built a story round them. To end, just a reminder that the best way to support this blog is to buy one of my books. Simply go over to Amazon, or Kobo and get one.
Labels: 2000 AD British Comic Book Comic Books Prog Slog