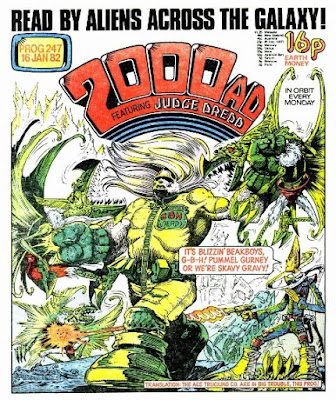 This particular issue of 2000 AD is super-ancient, published way back in January 1982, and it does show its age.

The next story, Mean Arena, is also pretty much just a big fight, this time with a future-sport angle. It features a single female character.

Then comes a very strange section where a sewer robot, named Ro-Jaws, writes a review of a TV show, Thunderbirds, that was made a couple of decades before the comic was published.

After that comes a short story, called a Future Shock, that again has no female characters.

This is followed by a story, called Judge Dredd, about future cities nuking each other. There are, again, no female characters.

Then comes a story, called Nemesis the Warlock, where there is a female character. She's in a bikini and has taken a vow of silence. Before the end of this installment, she has her life force stolen by a male character and is promptly forever forgotten.

The comic book is then rounded out by a story about a warrior, a man, and the only other character, apart from him and his team, is a sentient machine gun.

All these characters, be they aliens, future cops, or robots, are white men at heart, and there is not one drop of diversity in this stupid comic book.

When I take a step back, and think about the way I'm wasting my time reading it again, I wonder why I bother. I certainly have trouble recommending it to a reader of today, for anything other than the amazing art. But is the incredible art enough of a reason to waste my time on this dreck? Or is this my last prog-slog post?

Tune in next time to find out. Did you see what I just did? I just did my own cliffhanger.

Don't worry, we all know the power of nostalgia will bring me back. Next time, normal service will be resumed. There will be more recapping of decades old comic book stories, and less complaining.
Labels: 2000 AD Comic Books