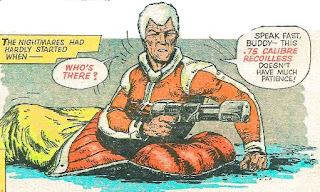 The most popular posts on this site are where I talk about 2000 AD, which I do because reading it was a very formative experience for me. I still read it today. I have a 2000 AD page where I link to all the issues I have talked about on this site. This post we turn our attention to issue 146 of 2000 AD came out 5th January, 1980, and cost 12 pence Earth money. 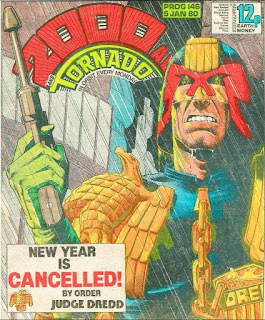 This issue has an amazingly disciplined image on the cover, by Brian Bolland, the sort of art that has made him such an in-demand cover creator for comic books, in the UK and in the USA. This cover marks the start of 1980, considered by many, including a commenter on Dredd Alert, to be the year of peak Dredd. 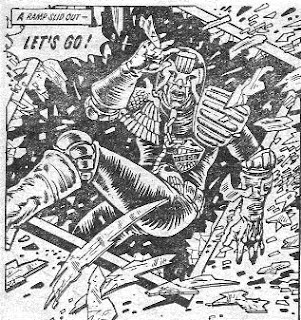 The Judge Dredd art inside is not by Bolland, however, but by Brendan McCarthy. He hasn’t found his style yet and his work on this story looks a little all over the place. In the story, by John Wagner, Dredd prevents any New Year celebrations in Mega-City One, as he searches for H-bombs hidden around the city.  The antagonist, Albert Sherman, is a bored genius explodes an H-Bomb in the Cursed Earth before holding the city to ransom with five more bombs that will detonate one per hour unless he types in a safety code. Dredd takes Albert to the site of the first bomb and handcuffs him next to it, giving him 41 minutes to diffuse it. Albert diffuses all the bombs and Dredd enrolls him in the Academy of Law.


Interestingly, for those who like a jolt of nostalgia, Albert Sherman's parents, Frank and Betty share their first names with the couple from Some Mother's Do 'Ave 'Em (1973-1978). The main character of this sitcom, Frank Spencer, a well-meaning, ineffectual and utterly accident-prone mummy's boy, had an iconic look, including dark beret and raincoat, and a catch phrase, "Ooh Betty," and the show was absolutely huge... a the time. The show also included some of the biggest and most dangerous stunts British comedy would ever see, and rivaled anything from Buster Keaton or Harold Lloyd.  Among the most memorable were a human fireworks display, dangling from the exhaust of a car as it teetered on a cliff edge and skating under a passing lorry. 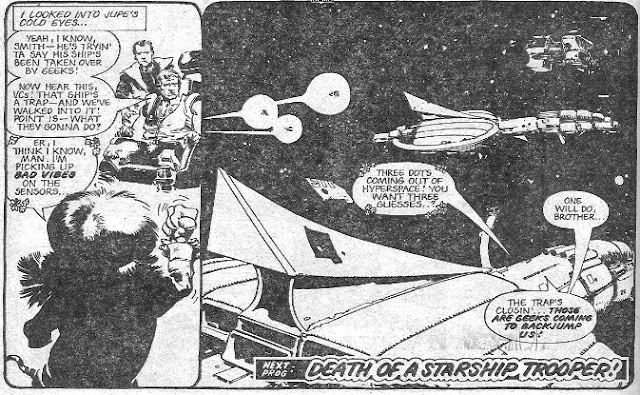 Cam Kennedy is back on the V.C.s in the next story and, interestingly, somebody seems to have noticed that one of the characters is a horrendous racial stereotype. A little retcon gets done this week to explain that the reason this character looks like Holly Golightly’s neighbor from Breakfast at Tiffany's isn’t because he is a “half cast” as originally stated in episode one, but because of a hyperspace accident that left him looking like a freak. I guess they’re trying not to be so racist, but the story is still problematic, trope-ridden, and a bit bonkers, but Cam Kennedy’s art is so beautiful I end up hate-reading it every issue.

Next we are presented with a page of Captain Klep by Dave Angus, with art by Robin Smith. It is the usual humor-free zone with extremely average art. After that is Stainless Steel Rat, based on a novel by Harry Harrison, with art by Carlos Ezquerra. It is a very intriguing mix of Hardy Harrison’s characters and situations, reflected through the action-oriented prism of British comic book writing of the late 1970s and early 1980s, all given the beautiful visuals of Ezquerra’s art.

Ezquerra’s spaceships, for example, are wonderful, organic things. They look extremely futuristic, but also lived in and workaday. The design of the outfits is great too, with integrated technology, padding at elbows and knees, and stylish stripes and areas of color. Alongside the top-notch concept art for costumes and spaceships, the talented Ezquerra can also draw a funny series of panels where our hero is trying out some alien hooch. 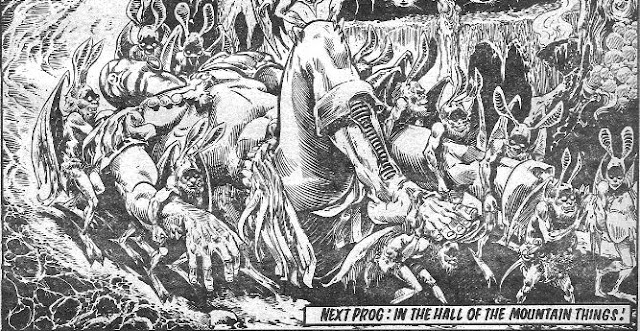 Blackhawk is next, and though it is not my favorite strip, this episode does start out strong. There is an alien who is actually threatening and some nice action, but then it reverts to the sort of fanciful shenanigans I don’t like as much, when hundreds of weird little bat people turn up. The next story, What Tharg Did on Sunday, with art by Carlos Ezquerra, features the comic book’s supposedly alien editor using cricket equipment to repel an alien invasion from another dimension. That sounds like fun, and it is, sort of, but I wish they had used the valuable comic space for some proper sci-fi instead. But I did enjoy Ezquerra’s only half-successful efforts to draw convincing cricket gear. It must have all seemed quite strange to the Spanish artist. 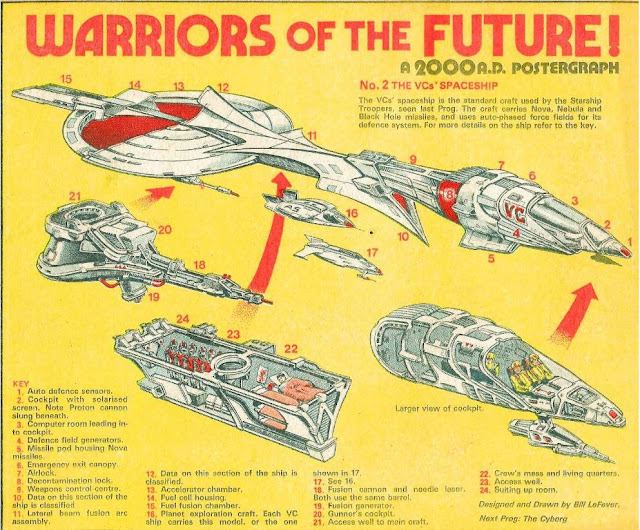 Every now and then 2000 AD does a cut away of some of the equipment and vehicles being used in the stories within its pages as a poster on the back. In this issue we get a poster based on the spaceships used in the V.C.s strip, and it’s a nice one, but it feels a lot smaller than the ship we’ve been presented with in the comic. Of course the interior and exterior of a spaceship not quite matching up has always been a problem in sci-fi. Even the Millennium Falcon only has enough room inside for the passenger areas, with nothing left over for engines or cargo.

There was half a great issue of 2000 Ad here, but it is a little swamped by all the filler. To end, just a reminder that the best way to support this blog is to buy one of my books. Simply go over to Amazon, or Kobo and get one.
Labels: 2000 AD British Comic Book Prog Slog