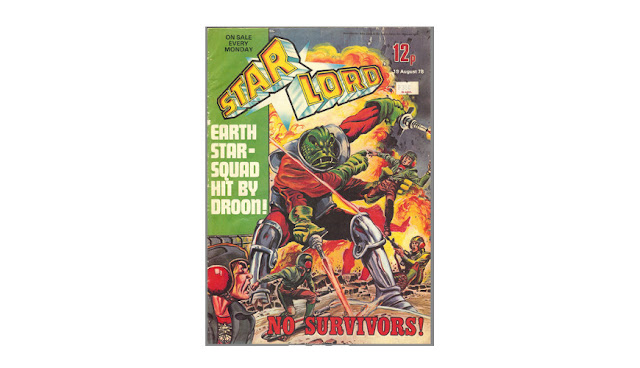 This is the fifteenth post I've done about rereading an old comic book from my youth called Starlord. This whole thing was prompted by scans of the entire run of the comic turning up on a website called Starlordcomic.com, allowing me to experience them all over again. It is actually a pretty frightening span of years since the first time I read this comic, as this issue of Starlord came out way back on the 19 Aug 1978, about 40 years ago.

At first glance, the cover of Starlord issue 15 looks like a run of the mill sci-fi image, with a big green alien, brave soldiers fighting it, explosions, all in an alien desert landscape... until you look a little closer. The human soldiers are riding rocket-powered skateboards, or at least one of them is. That's because this comic was published way back in 1978, when Star Wars and skateboarding were the two most important forces in British cultural life. That's how I remember it anyway, though I was eight years old at the time, which might have skewed my perspective a little.

As BoredPanda says about the summer of skateboarding:

California's 1970s skateboard culture left an indelible mark on America's cultural identity. The drought that hit California in the 1970s helped skateboard culture gain popularity. Swimming pools and drainage ditches lay empty and dry, allowing kids to carve them up with their skateboards.


I was about to write this cover off as hack work, only acceptable at best, until I saw that skateboard. Now I'm looking at it with new and admiring eyes, and I realize I actually kind of like it. I kind of like it a lot. As often with Starlord, it has nothing whatsoever to do with any of the comic strips presented inside however, which I remember I found frustrating at the time, but that does not mar its quality. It is a thing of beauty, but what about the stories presented inside the comic book.

As always, Mind Wars is the first story we see when we open the comic up, undoubtedly because it is the story the publishers were most proud of, and rightly so. This is also the story that is most greatly influenced by Star Wars. 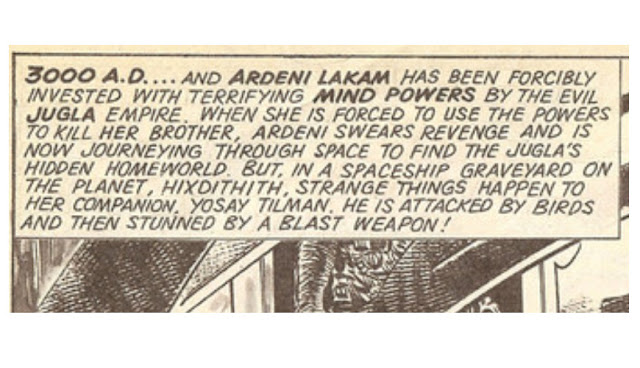 It has been running every week since the comic started, for a total of fifteen episodes now, which means it has a nice big text box at the start of the strip explaining what is going on, just like the text crawl at the start of Star Wars itself. The movie did this as a way to give the impression of it being an episode in an ongoing Saturday Morning sci-fi show of the 1950s. It's nice that where Star Wars had to fake it, Mind Wars has by now actually started to earn its long text intro.

George Lucas has admitted that the opening crawl of Star Wars was inspired specifically by the similar introductions used in the Flash Gordon serials. Such an opening crawl was also used in other Saturday Morning Serial Cinema such as Buck Rogers. His greatest work was inspired by such Saturday Morning Serials, combining science fiction and swash-buckling adventures with larger than life characters. These serials are episodic and so they started with a brief explanation of the plot so far. The crawl used in Star Wars is just one example of how these were shown in such serials. 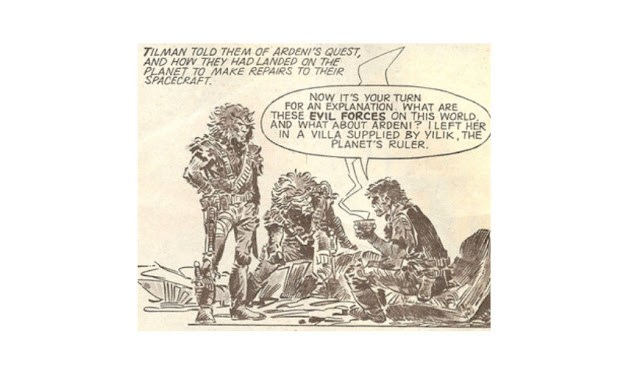 In this episode we are introduced for the first time to a pair of alien merchants that look like lions. One even has an eye patch. It could look a bit hoaky if drawn by an artist less talented than Redondo, but he makes the two lion-people look really pretty good. In fact the human with them in this panel, Tilman, looks just about as grizzled and wild as the two lion-people do. 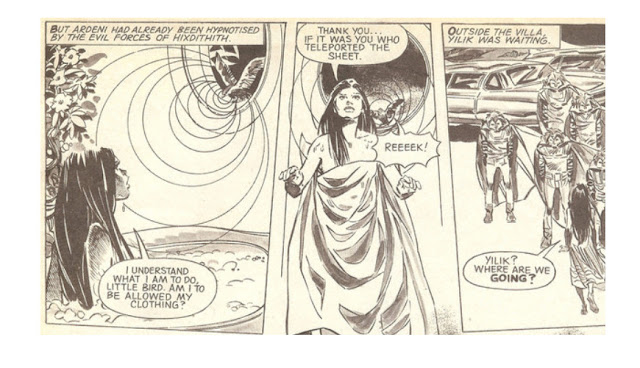 Later, there is a scene where the main character, Ardeni, is taking a bubble bath, which sounds pretty exploitative but Redondo keeps her covered up the whole time. Mind Wars has a reputation for Ardeni stripping off on a regular basis, but so far, at episode 15, it doesn't seem deserved to me. I don't think the story passes the Bechdel test, but Barbarella it certainly isn't. It is good, honest space opera with starships and mind powers, just the way I like it. 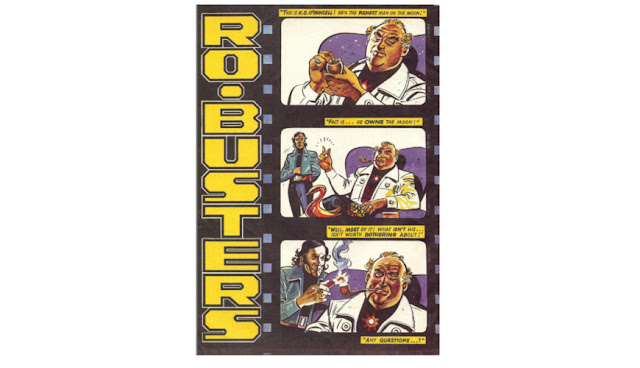 Ro-Busters comes next, and it has a very effective opening image, introducing some rich old geezer who owns the moon. Ro-Busters are described here as a World-Famous Droid Disaster Squad, which is god encapsulation, I think. It is influenced by shows like Thunderbirds, but it too is influenced by Star Wars. 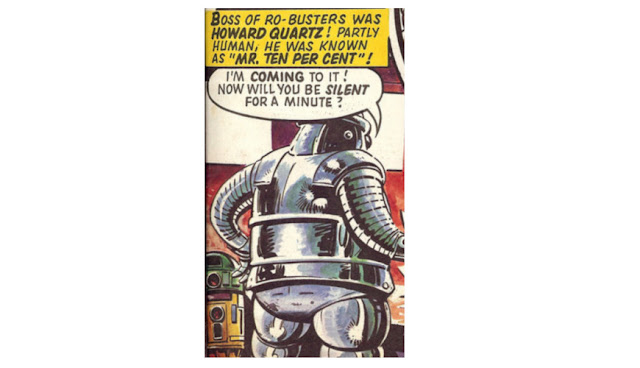 I didn't notice at the time, but in the back of one of the panels on the next page we see R2-D2. It made me smile to notice it, all these years later. And this is the first Ro-Busters story I didn't immediately feel a sense of recognition about. This made the story a treat, because it had completely slipped my mind, which meant I was reading it like new. 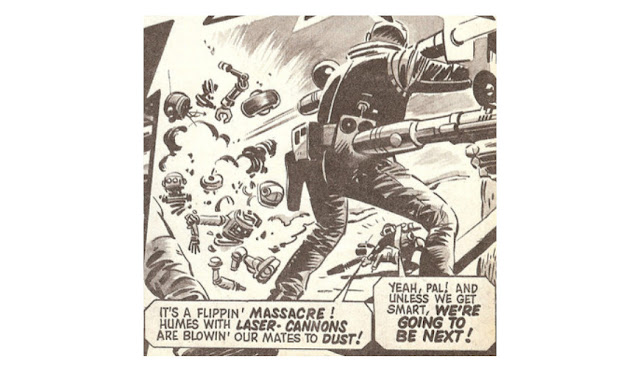 The first installment is enjoyable enough, and it takes place among the nicely rendered, dark and moody environs of the moon. The robots of Ro-Busters are taken to a remote mining town, and the story ends as some unexplained violence breaks out. It's nice character driven stuff that seems to be setting us up for action to come next week. 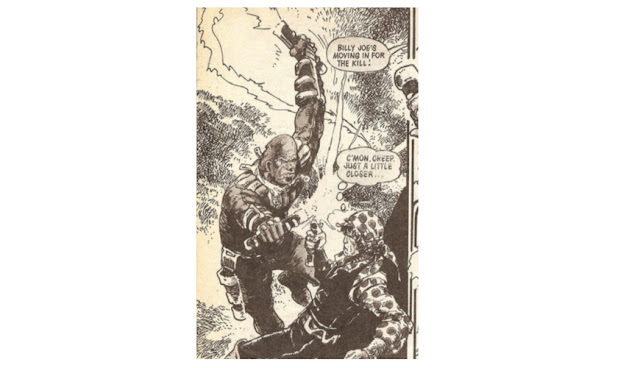 Then comes Strontium Dog, and there is an extended duel between the hero and the bad guy with weapons that are half lightsaber, half whip. It makes for very dynamic action, that I am sure works better in a comic than it would in live action or animation. Making these complex weapons look good would be a very challenging job for the CGI people of a movie. 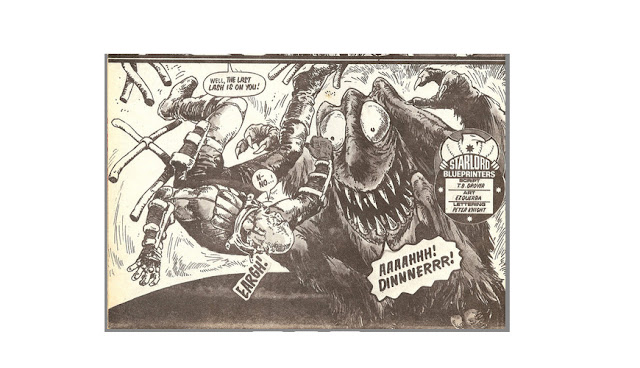 The battle escalates nicely, with the bad guy using his laser lash to unlock the cages of a bunch of alien monsters. Johnny then turns the tables and cuts the metal bars below the bad guy's feet, plunging him into one of the monster cages. The creature inside, beautifully drawn by Ezquerra, then has the bad guy for dinner.

There's one more story, but it's terrible. It's a dumb thing called Holocaust, which is just one long exposition dump after another. Apparently Earth is being invaded, and the aliens are vulnerable to concentrated nicotine smoke, oh and burgers. It is, like I said, just dumb. But every comic has to have one bad strip. All you can really expect from a comic is that it present just one or two quality stories. Starlord regularly presents three or four excellent strips, and I can't wait to read the next issue. Actually, I don't have to wait. I can just go to the website and read the next one.
Labels: British Comic Book Prog Slog Starlord