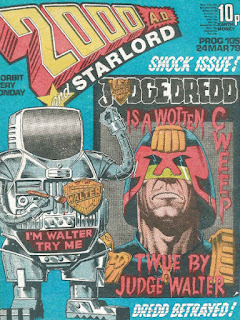 I write a lot about 2000 AD, reading it as a child was a very formative experience for me, and I still read it today. I have a 2000 AD page where I link to all the issues I have talked about on this site. Judge Dredd is on the cover of issue 105, which came out way, way back on 24 March 1979. The cover is a scene from this week’s story where a hideous and insane tyrant is manufacturing fake news. With Trump in the White House, it is so timely it is a little spooky. This cover is by Brian Bolland, even though the interior art on the story is by somebody else, which has become the standard way for Bolland to work. His covers on DC books such as Animal Man, Robin, The Invisibles, and Wonder Woman have won him numerous awards. 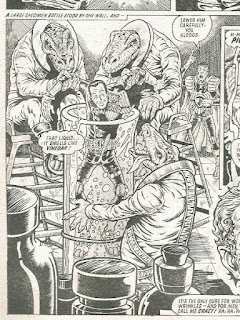 The Judge Dredd strip is the first story presented this week. The story is drawn by Brett Ewins, who has a style that suits the horror elements here. Ewins passed away a couple of years ago, which makes looking at his art quite moving. This week, Cal (the Trump-like dictator) punishes one of his minions by having him pickled by his pet space alligators. I prefer my Judge Dredd to be its usual sci-fi self, but the kind of suspense and psychological horror we get this week works for me too. Stylistically, Judge Dredd has been all over the map recently, which is strange for the most popular character in the whole comic book, and you would think 2000 AD would know what they wanted him to be by issue 105. You would expect them to be more disciplined about presenting a consistent story, but they were still getting to know the character, even after over 100 issues. 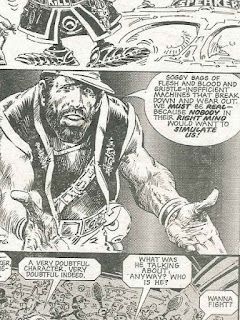 Robo-Hunter is the next strip and I am not a fan of its broad antics. Also it doesn’t help that the offensive rabbi robot from last week is still hanging around. The artist, Ian Gibson, is so talented, but he is wasted on this rubbish. He is so confident at shading and designing technology, suggesting it with just a few strokes of the pen, that it is annoying to see such talent squandered on a “humorous” comic strip. 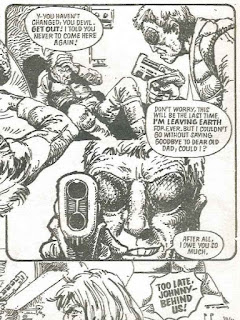 Strontium Dog is the next strip and it is not much more than a beautifully drawn, extended, and frenetic fight scene this week. (That is not a criticism, by the way). This story will go to some strange places over the coming weeks, but it already has a great bad guy in Fly’s-Eyes. 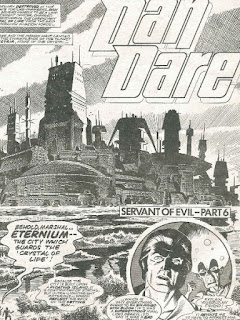 Dan Dare is next, and as usual the art is the best thing about this strip. Just look at this gorgeous Alien Swamp Complex. It turns out this complex is like Lourdes and the Mekon (the bad guy who has brainwashed our hero, Dan Dare) needs to visit it in order to heal and rejuvenate. 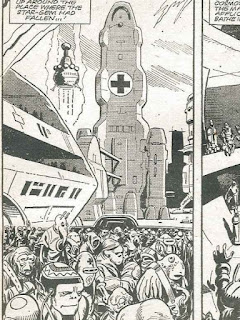 There is a lovely panel of crowds coming to visit this complex. The drawing of all the different aliens, dwarfed by huge hospital ships landing in the background, is evocative and wonderfully drawn. This is the sort of thing I read sci-fi comic books for. It’s just a corner panel, half way through a second-string story, but it is a thing of beauty. Next is Ro-Busters which features robot designs by Kevin O’Neil drawn this week by Mike McMahon. This, for me, is the best of both worlds. We get the intricate droid designs of Kevin O’Neil, drawn with the weight and dynamism of McMahon. Where O’Neil’s droids are shiny and static, McMahon’s are dented, scratched, dirty, and dynamic. 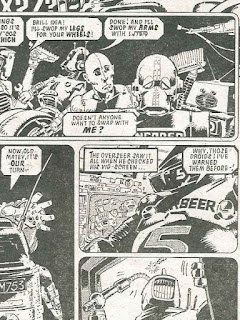 There is a great scene here where the robots play “swopsey” to annoy their robot overseer. The way this overseer is drawn, with a robot version of a beer belly and obscenely large nipples is just lovely. It is sitting in the shadows, in its lair, watching over the other robots on a vid screen. The game that annoys the overseer so much is where the robots swap their arms and legs with each other. Many of them have the same attachment joints for their limbs, making this relatively simple.

After the game of swopsy, we get Hammerstein's war droid body with Ro-Jaws’ shark-like head, which is an awesome combination, specially when drawn by McMahon. This is a great episode of what will be an epic story, and it makes me very happy that the robots escape the destruction their owner had planned for them. 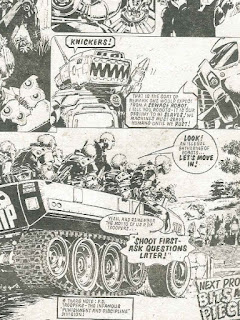 The robots briefly debate whether - now that they are unexpectedly free - they should give themselves up or not. This question is answered for them when the Robot Investigation Police arrive. We have seen these guys before, a few issues ago now, but this is McMahon’s take on them. It isn’t subtle but it is iconic. Instead of their previous look, which was futuristic Roman gladiators in leather fetish gear, McMahon imagines them as intimidating, none-too-bright skinheads in a Nazi half-track. Their appearance at the end of the installment is genuinely chilling, and I remember being really worried about what was going to happen to Ro-Jaws and Hammerstein when I read it the first time. It is a real cliff-hanger ending to a classic episode of a classic strip. 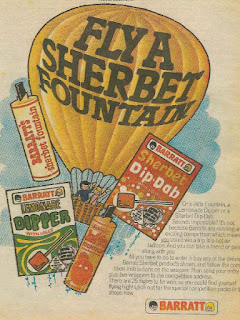 The back page of the comic this week is an advertisement for a treat called a Sherbert Fountain. This, for those who don’t know, is a cardboard tube of sherbet with a piece of black licorice sticking out. It is wrapped in yellow and red paper, and the licorice just pokes out the top. The licorice is hollow, so you use it to suck up the sherbert. I was debating whether to use the past tense when writing about the sherbert fountain, but they do still make them, except... 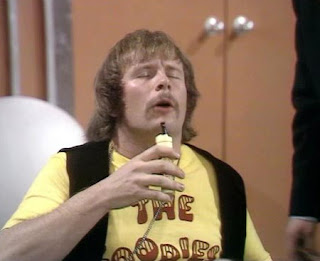 Except now the manufacturers have replaced the cardboard with a plastic, resealable tube which is designed to make it more hygienic and keep the product fresher. But it was the devil-may-care attitude to hygiene and the special taste of stale sherbert and hard licorice that was what this treat was about, back in the 1970s.