Reading a comic book called 2000 AD page was a very formative experience for me back in the 70s and 80s, and I still read it today. This post, I'm talking about issue 27, which was published in 1977. It has a well drawn cover, by Brian Bolland it looks like, but it also looks like a portfolio piece reworked for inclusion in the comic through the addition of some text. It is an attempt to turn a static, contemplative image - of an astronaut with a frog inside his helmet - into something with a little more action. It also absolutely does not work. Even though the text that the frog is supposedly speaking says he is going to eat the guy's face, the visuals of a sleepy little frog and supremely unconcerned astronaut say otherwise. 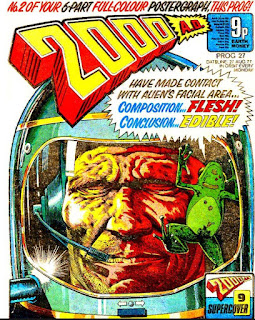 The first story presented in this issue is Invasion, with some slightly substandard art. It is, of course, a clever story to start a sci-fi comic book of this era because it is basically just the type of war story that readers of the 1970s were very familiar with, but transposed to a slightly futuristic setting. The story takes place in a future Britain (the setting is 1999) that has been invaded by an Eastern power called the Volgans (a mix of the commies and Nazis, and utterly evil). This week, Bill Savage and Peter Silk, the traveling insurgents who are the heroes of this story, go to Scotland.

The art might not be quite up to the standard usually seen inside the pages of 2000 AD, but it is atmospheric, and it does capture the rain soaked expanses of the Scottish borders and bleak architecture of Glasgow very well. It takes you back to a 1970s UK of poverty and class division that is sadly returning. The difference between middle class officer, Silk, in his stylish rain coat with fashionable long hair and glasses, and working class truck driver, Savage, in leather and jeans with receding hair slicked back, is stark. Unfortunately these class divisions are returning, and you could invent two similar characters for a story along these same lines today. Unusually this story is not tied up in a single installment, so we will have to wait till next time to see what happens.

Harlem Heroes is next, and the story takes an interesting turn as the team are forced to fight their own manager. He thinks they are too sporting, and he wants more 'blood and guts' so he can increase his ratings. It's a plot twist that echoes what was happening in the British comic books industry at the time, at least in the comic books aimed squarely at boys. Blood and guts was seen as the formula for success, born out by the sales figures of the most controversial comic book at that time, Action. It is no wonder this theme was on the writer's mind. The strip then gets unceremoniously wrapped up, and the inescapable implication us that this is because it didn't have enough blood and guts.

Shako is the next story, and it does not have that problem. Every issue includes at least one bloody kill, meted out by the hero of the strip, a polar bear being hunted by the CIA because it has eaten a capsule containing a top-secret germ warfare weapon.

For some reason, this episode includes a medical orderly that looks a lot like The Fonz. I guess it makes some kind of sense, because the Happy Days show had already been on screen in the USA for years and was probably making its UK debut around this time, but it is still a strange choice to include him as a medical orderly, rather than a leather jacket wearing bad boy. His appearance is only a cameo, however, as he is dead within three or four panels.

The grim strip ends with a fascinating encounter where another star of popular culture of the time, Nurse Ratched, here called Nurse Hatchett, from One Flew Over the Cuckoo's Nest, takes on the murderous, ursine hero of the strip armed only with electroshock paddles. It is horrific and entertaining, though it is marred by some bad dialogue, some stereotypical language from a black character, that leaves a nasty taste in the mouth.

Next we have a Future Shock that is drawn in an old-school 1950/60s style and starts off by taking its premise of an alien invasion gratifyingly seriously. The first two pages are a sparse and clever story combined with classy art. The story doesn't have an ending that is worthy of the setup but that's often how it is with the short stories presented in Future Shocks.

MACH 1 comes next, and it is an immediate improvement on its usual mediocrity because it has art that is done by Jesus Redondo, one of the best comic book artists working at the time. He announces his presence on art duties with a bravura full page splash showing an astronaut being burned alive inside his space suit. It looks wonderfully good, combing Redondo’s drawing skill with a lightness and freedom that makes the art sing. 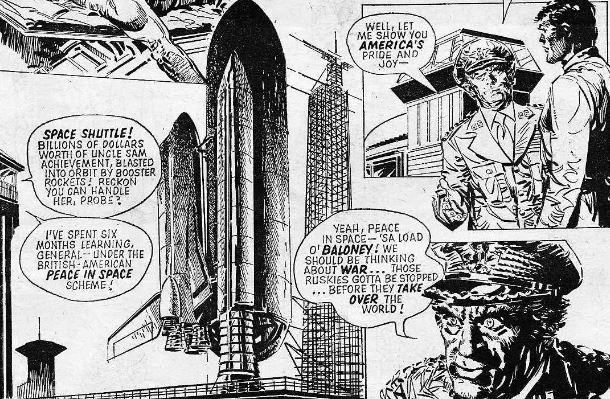 The story has our hero, John Probe, code name Mach 1, taking a spot on the Space Shuttle after doing a six-month course. It's baloney, but the drawing of the shuttle by Redondo is a thing of beauty. The story is all setup, but that doesn't matter because they manage to get some action shoehorned in, and the scenario being put together is an intriguing one. Probe, a superhuman, is copilot on the mission. The pilot has been killed and replaced with some kind of super clone. They are up in space by the end of the episode, and Probe knows the pilot has some kind of evil plan, he just doesn’t know exactly what it involves.

Judge Dredd is the last story, and it gives us a look inside the Academy of Justice, where cadets are taken in as children and graduate at age 20 as members of Dredd’s fascist paramilitary police force of the future. There is some nice world building here, and the art, by Gibson, is nicely shiny and futuristic, though there are some cheesy touches, like a dummy on a spring that looks like something out of a Roadrunner cartoon.

Interestingly, the thugs that must be dealt with by our paramilitary law officers are people suffering from something the comic book calls Future Shock. This is the second place the idea crops up in this issue because it is also the title of the comic book’s short story segment, and I can't help wondering if the writers had come across an article about it in a news magazine or something. 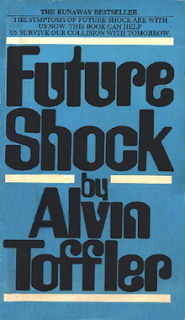 I googled it up and turns out that it is more than an article, it is an entire book. Future Shock is a 1970 book by the futurists Alvin and Heidi Toffler, where the authors define the term future shock as a psychological state of personal perception of too much change in too short a period of time. There was also a documentary film based on the book was released in 1972 with Orson Welles as on-screen narrator, but what I think is likely to have put the idea in the writer's head is the 1974 movie The Parallax View, where the character Joe relates a story to Lee about a woman having an affair with her psychiatrist and then a bulldozer knocking down his house by calling it future shock.

To end, just a reminder that the best way to support this blog is to buy one of my books. Simply go over to Amazon, or Kobo and get one.
Labels: 2000 AD blog monetizing British Comic Book Prog Slog