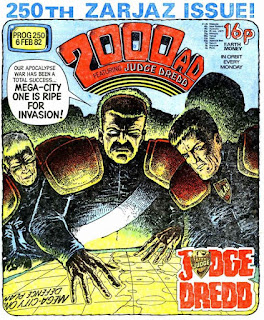 One of the regular features - if you can call it that - on this blog is a bunch of posts where I go back and read old comic books that I once ready, many years ago, in my childhood. It's a bitter-sweet experience, because the nostalgia of seeing this stuff again is always very enjoyable, but the comics themselves are often less so.

This edition of the comic book, for example, has a dull cover, with three old men looking at a shiny map, it doesn't exactly scream action and sci-fi adventure. In fact, I often wonder how 2000 AD has survived through the years, considering the talent the editorial team has always had for choosing really, really terrible covers. The best thing I can say about it is that at least it's colorful, but the sooner we take a look inside this comic book, the better.

The first story is Ace Trucking Co, and to say that it starts with some action is an understatement. The hero of the strip, Ace Garp, uses his spaceship to slam an icy asteroid into the surface of a planet, in a premeditated attack intended to take revenge on a bunch of space pirates who were bothering him a couple of issues back. It is a very violent action, likely resulting in huge numbers of deaths, but the heroes certainly don't worry too much about the devastation they are causing. It feels strange now, but back then in the early 80s, this level of thoughtless violence was pretty much standard for a British comic book of the period.

There is great creativity, however, along with the bonkers storytelling, and once again I am struck by what a great design the Speedo Ghost is for a spaceship. It has weight, and character, and a sense of geography to it, all conveyed in a few comic book panels. If I do another top-ten spaceships list, Speedo Ghost will certainly appear.

Only one story in, and I'm already feeling a lot of nostalgia. If I'm honest, the nostalgia is the biggest factor that keeps me, post after post, coming back to this ancient comic book. The ads are just as evocative as the stories, especially when I remember being a kid who actually bought the products. This week there is a great ad for Jaffa Cakes, with an old company mascot that is now long forgotten. I remember him though, and the sight of him, in his superhero outfit and biscuit hat makes me smile.

Next comes Mean Arena, which is just a blow-by-blow account of a game of some kind of weird, gladiatorial future sport. The small-scale thrills of the strip actually work quite well. 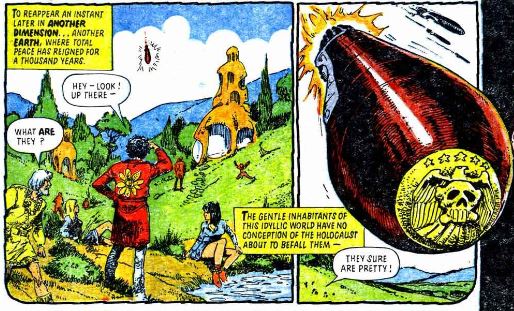 Then comes Judge Dredd, and after the carnage of the Ace Trucking Co asteroid attack, we have more weapons of mass destruction here. Judge Dredd's enemies wipes out an entire planet full of hippies using special missiles called TADs, or total annihilation devices. It's gleefully manic destruction on an epic scale, almost guaranteed to please the young boy I was when I first read this crazy comic book.


The next story is Nemesis the Warlock, and it has an outstanding artist in Redondo, but you can't help but wonder what O'Neil would have done with a planet full of spiders, like in this week's installment. It might have taken him months, but it would have been a wonderful thing to see.

Then comes a strip that is just story after story, set in a never ending future war. It is another strip that has so much action, there is little room for anything else. But just when I think I might quit reading old back issues of this comic book, something special comes along, some surprise that keeps my interest. In this issue it comes on the back cover. 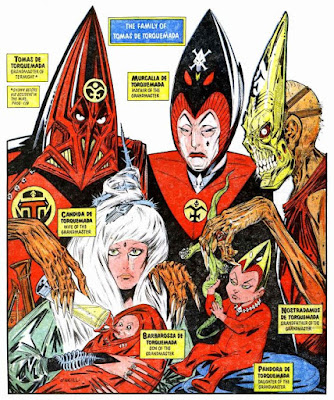 On the back cover of the comic book there is a picture of the baddie from Nemesis the Warlock, who is the dictator who rules Earth. He is a scum bag who wants to cleanse the galaxy of all alien life, leaving only humans behind.

Something about his xenophobic lunacy, and about his relationship with his wife, the young woman in the foreground with a tear in her eye, reminds me very much of Trump. This isn't the first time that one of the dictator antagonists of 2000 AD has reminded me of Trump, which says something about the fat, orange man's cartoonish villainy.
Labels: 2000 AD British Comic Book