A couple of years ago, after reading the original Prog Slog Blog, I got it into my head that, like that brave blogger, I should also read every single issue of 2000 AD. I was, of course, aware it would take some time, but not exactly how long. The issue I’m reading for this post is number 339, which comes from 22 October 1983, so I still have some way to go before I catch up to the latest issue - something like 37 years. Over three decades of publishing is a lot of comic books, but I am currently continuing with my self-imposed task regardless. I guess it’s best not to think about it and just press on.

By way of context, so you can get a feel for the world this comic book was published into, just a couple of days after the publication date of this comic book, the US of A went to war with... wait for it... Grenada. Grenada is a tiny Caribbean island nation with a population of about 91,000. Not unexpectedly, US victory came within a matter of days. Hilariously, this invasion was code named Operation Urgent Fury.


A senior British officer who watched the Grenada invasion from nearby Barbados, Maj. Mark Adkin, wrote afterward that it was launched because of the intense desire of the president and his advisers to raise US prestige, particularly at home and in the armed forces, where morale and self-respect had fallen substantially since Vietnam. 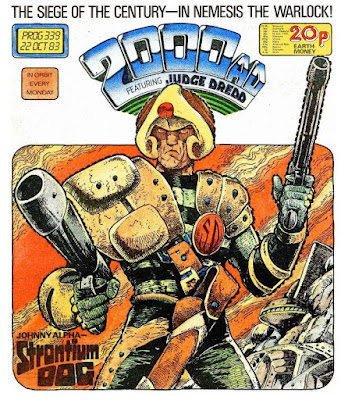 Enough context, let’s take a look at the art on the cover of this thing. The cover of this issue, by Ezquerra is beautifully drawn, as usual but... Is it just me... Or is it a little phallic? I like Ezquerra, and I like Johnny Alpha, the hero here, but the big guns are way too exaggerated to be easily taken seriously, even after suspending a bug chunk of disbelief. And they aren’t the worst thing. The worst thing is the leather holster hanging between Johnny’s legs. This is long before comic books really went down the road of heroes with oversize weapons, but I think this image has already gone a little too far. 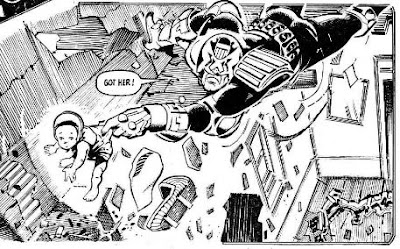 Judge Dredd is the first story up, and a typical working night for the future law enforcers has escalated gradually over the last four episodes until now tower blocks are coming crashing down around Dredd’s ears. The story so far has focused on how the judges ruthlessly deal with crime, in their usual authoritarian way. But this week we see another side to Dredd, as he attempts to rescue a baby. At the end of the episode it looks like Dredd is about to pay for his heroism with his life in an absolutely superb cliffhanger. I just hope they don’t cheat next week and have him catch a flagpole or something lame like that. 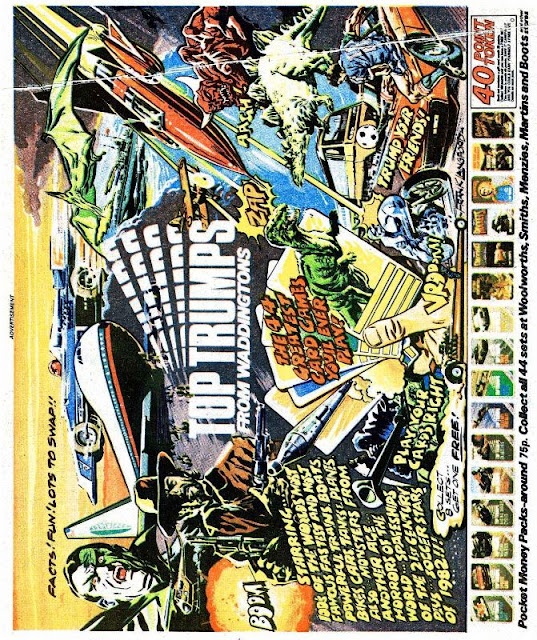 Then comes a full page advert for Top Trumps. Top Trumps are pure nostalgia gold for me, and just seeing this advertisement makes me smile with glee. For those who don’t know, Top Trumps was launched in 1978, and it was a card game popular with adults and children in the United Kingdom. Their golden age was in the late 1970s and 1980s, especially among boys, for whom it was a popular playground pastime. The topics tended to reflect this, and included military hardware, modes of transport, and racing cars. The packs tended to be priced so that children could collect new packs by saving pocket money for just a few weeks.

The next story up is Slaine, and after all the carry on last week, we get a really gross fridging this week. Slaine's mother gets trampled by horses, just so he can have a little motivation to hate his dad. It's terrible, tropey, and sexist storytelling. 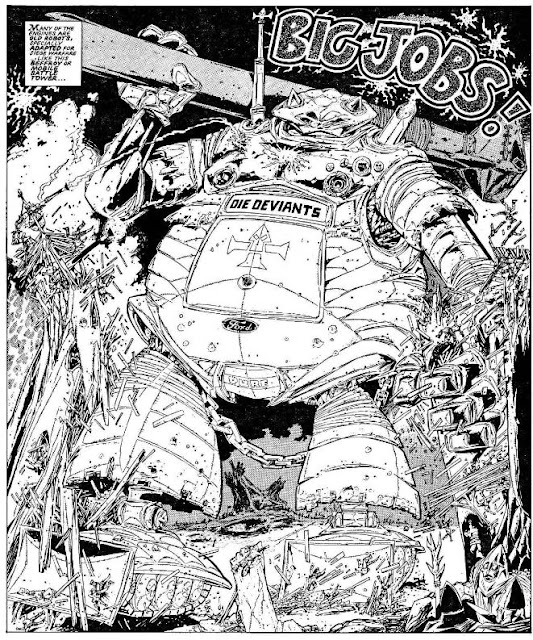 Next comes Nemesis the Warlock, and we see a much altered Mek-Quake. It's all fun, but with some unfortunate casual sexism thrown in. There is only one female character and she is a kind of nurse. The art, as always though, is wonderful. There is intricately drawn mayhem in every panel. 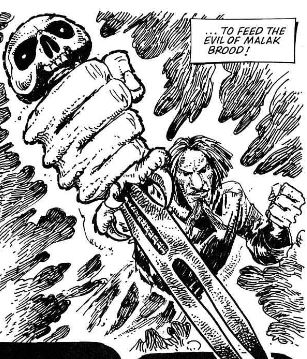 Next comes Strontium Dog and the ongoing story has been very promising up until now, but suddenly it decides to introduce a Fu-Manchu-type character, just like Nemesis the Warlock did last issue. It's this kind of stuff that makes me want to stop reading this comic book. Maybe I'll actually do it. Maybe I'll actually stop, as a protest against all the sexism and racism to be found in these old comic books.

We'll see. I'm vexed, it has to be said. There is so much good here, but so much bad, too... This issue was a particularly bad one... once again.

To end, just a reminder that the best way to support this blog is to buy one of my books. Simply go over to Amazon, or Kobo and get one.
Labels: 2000 AD Comic Books Prog Slog