I write a lot about 2000 AD because reading it was a very formative experience for me, and I still read it today. I have a 2000 AD page where I link to all the issues I have talked about on this site. This particular example comes from long ago in 1977, and is only the 28th ever published. 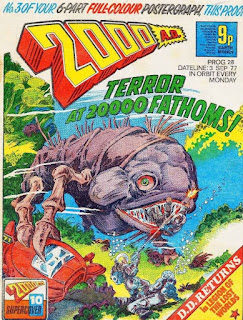 The cover of this issue has a little announcement in the corner telling us that Dan Dare is back. The art to go with this important announcement, for some reason, is a sketch of a battle between space men and a giant fish. It is a waste of a cover, even if there is some action and whimsy to it. After all... Dan Dare is back, and he should be the cover star. Period.

The first story this week is, as usual, Invasion, and this episode is just crazy. It revisits the idea of an old-timer redeeming himself through self-sacrifice that we saw in the last episode. Last time a failed world-speed record boat pilot with a broken back took his super-fast boat on a suicide run, which is bonkers enough, but this week a washed up footballer is killed attempting to volley a grenade. I don't know who these redemption of an old-war dog stories are aimed at, considering the average reader when this comic first came out was probably a school-age boy, and I doubt they resonated much. 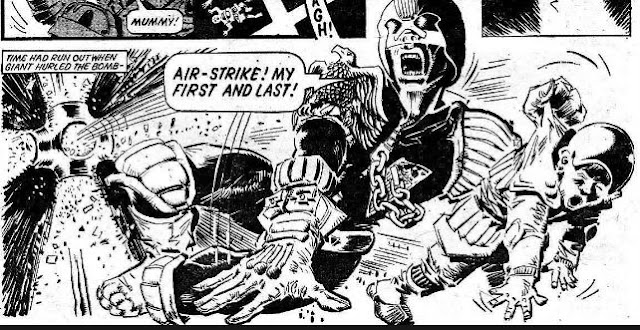 In recognition, at last, that Judge Dredd is the star of this comic book, his strip has been moved up from the back of the comic book, where it has been languishing until now, to second story. I doubt it will be long until it makes the move to first story, replacing Invasion.

In an interesting decision, this episode sees the recently ended Harlem Heroes strip being inserted into the same universe as Judge Dredd. It doesn't completely work, but it does give us Cadet Giant, who will go on to he Judge Giant. I will never forgive the writers for killing him, and it would be great if that was retconned and he made a return. The strip also has great art, done by McMahon in his scrappy, early style. His take on the Harlem Heroes uniform is fascinatingly different to the clean lines of the outfit when it was being drawn by Gibson. The only fly in the ointment is the dialogue of Giant and his father. It is groan-inducingly stereotypical, like something from a blaxploitation movie. As E. Young writes in Global Comment:

It wasn’t until I was older and I saw Mandingo for the first time that it dawned on me that blaxploitation genre films might be problematic. After watching the documentary BaadAsssss Cinema, I stepped back into the movies of my childhood with a more critical eye. I had to admit, on the surface at least, blaxploitation was rife with a lot of problems such as misogynoir (misogyny aimed towards black women), language that wasn’t even okay “back then”, and perpetuating white-created stereotypes of black communities. Worst of all, since these movies were aimed at black audiences, the genre ended up pigeonholing a lot of black directors and the studios they worked for as unmarketable to “mainstream” (read: white) audiences.

The author of the article goes on to pick ten of his favorite movies from the genre, so he obviously doesn’t think it’s all bad. Unfortunately, hearing the kind of Jive Talk from those movies reflected through the work of writers on a British comic book of the 1970s is painful.

Next up is Shako, which is its usual action-packed, horrific, and unique self. Shako leaves the settlement he has been bringing death and horror to, and returns to the ice, but don't worry, there are still victims to be found out in the snow fields. He soon discovers two oil pipeline engineers and tortures and kills them. This story takes the original template of Jaws, but carries it to a new extreme. Shako is no longer a force of nature, like Jaws, but becomes the polar bear equivalent of the mythical, superpower serial killers of later 80s horror movies. It is a fascinating story, and unlikely ever to be repeated, though there are echoes in The Terror.

Next comes the return of Dan Dare, now drawn by the disciplined hand of Gibbons, rather than the fanciful pen strokes of Belardinelli. At first glance it looks very promising. We get all the exposition we need, and Dare is on his way to recruit a crew inside two pages, which is nice sparse storytelling. We even get an establishing shot of Topsoil, the habitat where this episode is set, all before those first two pages are done. 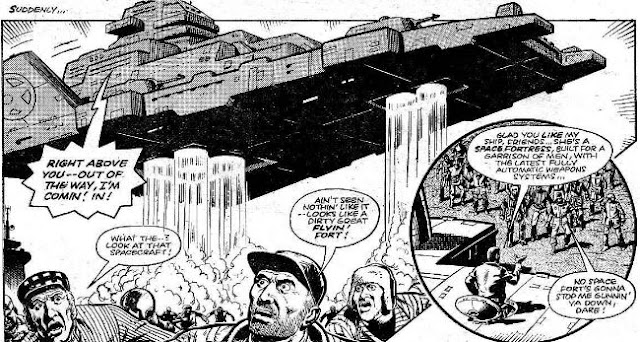 Dare then recruits three white men in a string of action set pieces and the story is rounded out with the first look at his spaceship. It is a ‘space fortress’ and looks very robust and thickly armored. There is zero diversity, and there are no female characters, but with those huge caveats considered, it is a promising start to what looks like it might be an entertaining slice of space opera. 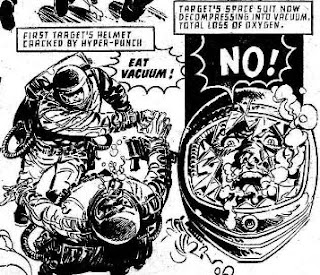 The next story is Mach 1, and it is beautifully drawn and action packed. The super spy hero of the story is aboard the US Space Shuttle and trying to thwart a plan to start a nuclear war. Half way through the episode, the shuttle has been taken over by the bad guys and they have deployed its manipulator arm and used it to pull off the solar panels of a Russian early warning satellite, so his mission isn’t going well. Luckily, this story is a three parter, so Mach 1 will have one more chance to save planet Earth.

The final story is a real gem, drawn by Kevin O’Neil. It is thin stuff, about genetically altered animals in a war against robot drones, long after humanity has gone extinct. As a story, it isn’t much, but the art is a wonderful, early example of O’Neil’s manically detailed work.