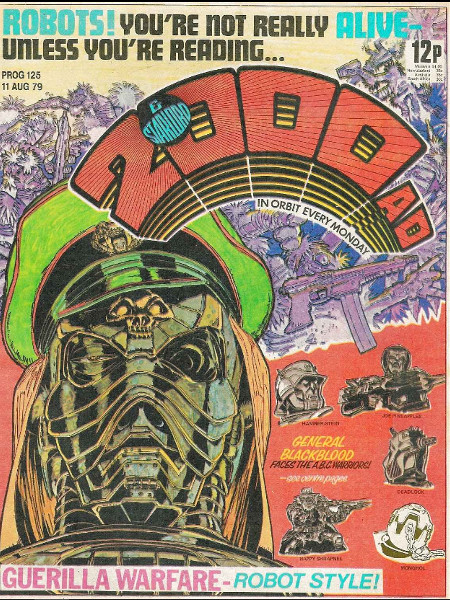 Let’s go back in time and take a look at another issue of a comic book from 1979. This issue of 2000 AD gets rid of the red border that the last few issues have been rocking, and it is good to see the back of that border. It was hideous and I have no idea what they were thinking. Without a red border, the image gets pretty much the entire cover, an it is a doozy. On the cover of this issue we have a truly nightmarish robot, General Blackblood, with a scene of jungle carnage behind him. For me this is the golden age of ABC Warriors and it is great to see this being acknowledged with such a beautiful cover. 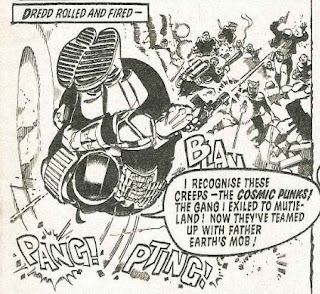 Before ABC Warriors, however, there are a few other great strips to read before we get to it. First up is Judge Dredd, drawn by Ron Smith, who once again makes the future lawman something of a superhero. 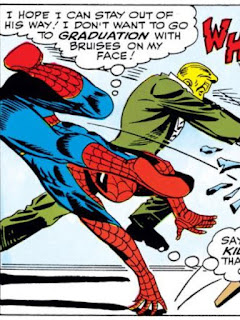 In this installment Judge Dredd leaps like Spider-Man into a room full of bad guys, and takes them all out. Then he has to go to take on Father Earth, who is trying to destroy he entire city because it is the root of all evil. The end of the story is a little anticlimactic as Father Earth is eaten by an alien plant. He had such intricate plans to get into the city, but he didn’t know what to do when he got inside. 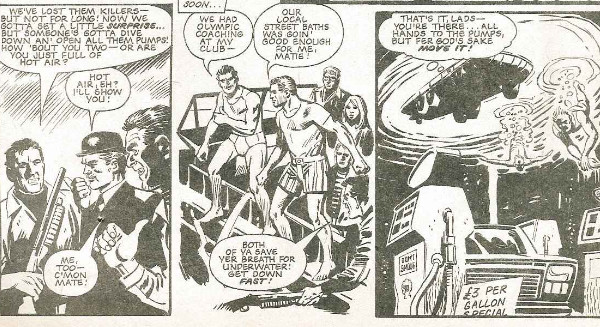 Disaster 1999 is next, and quite forgettable, but there is a funny moment when we get to see 1970s underwear. One guy is wearing striped shorts and another wears a pair of briefs, as they dive into the flood waters of London. 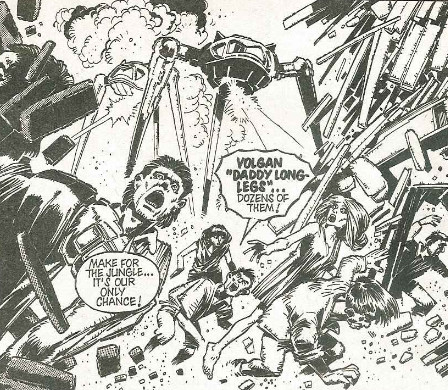 At last, it is time for the stand out story of this issue, the ABC Warriors. The story starts with a burst of violence where a female school teacher and her class full of innocent children are snuffed out by pantomime bad guys. These bad guys are commando robots and they carry on to kill everyone else in town. This is sledgehammer storytelling, of course, but it sure does establish character. There are other problematic elements to the story, too. I realized, reading the comic book again as an adult, that some of the references in the story went straight over my childhood head. 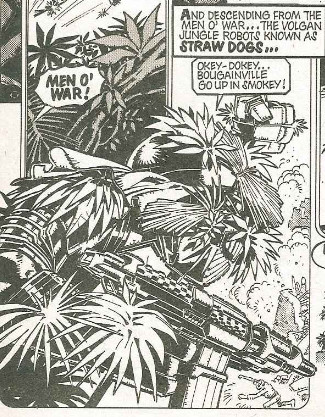 Last week I noticed that one of the characters was called the Grand Wizard, an extremely problematic reference to drop into a kid’s comic, and something similar happens this week, too. The evil commando robots from the story this issue are called the Straw Dogs. 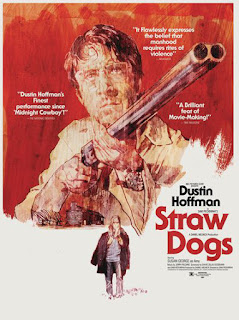 It suddenly feels like 2000 AD is coming thick and fast with the distasteful names. Straw Dogs, of course, is an extremely problematic movie. As WhatCulture.com says:

What really got critics, the censors and the viewing public going was the fact that this was no ordinary rape where the woman is defiled and traumatized. No. Amy appears to begin to enjoy the assault half way through. As a woman I am making a stand. I personally find this I'm Enjoying Being Raped scene highly offensive and dangerous. It is encouragement to perverts out there and advocates of the She Was Asking For it/She Enjoyed it Really theory. Peckinpah is effectively condoning violence against women.

Nothing like this happens in the comic book, of course, but the story is extremely brutal, though there is also humor. General Blackblood references a Monty Python line the very first time we see him, and he has a chalice filled with black robot blood that he sips at. He has a missing eye and a pot belly, even though neither thing makes any sense for a robot – making him a recruit to the ABC Warriors team with a lot of character. 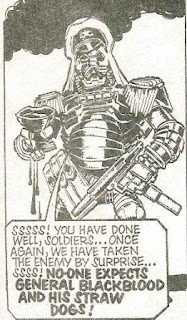 At the end of the story it turns out that the school teacher survived, and we get a great image of the enemy robots the ABC Warriors are hunting. They are camouflaged with jungle leaves, and below their faces are like bare skulls. It is an amazing piece of art from Mike McMahon at the absolute height of his powers. 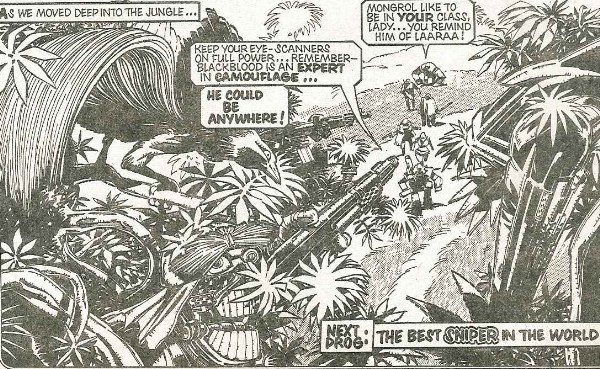 Project Overkill and Dan Dare come next, and both are just fine – Dan Dare especially is much more interesting now, and this episode introduces a lady with a pet pterodactyl – but it is ABC Warriors that has left the most powerful impression on me. It was the most powerful story when I read this comic book back in 1979 and it has hit me the hardest when I read it again, so many years later.