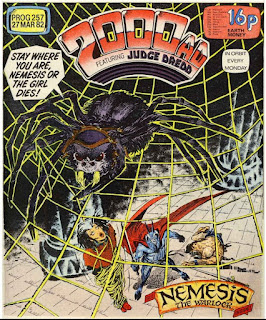 The madness continues as I read yet another comic book from my childhood. In this post, I am reading issue 257 of a comic book called 2000 AD, which was published at the end of March in 1982. This is when I bought it, and when I read it for the first time. It's not the last time I read it, however, because I kept my back issues of 2000 AD in a pile in the corner of my bedroom and regularly looked through them when there was nothing on TV. And, back in the 1980s, there were often long periods when neither broadcaster was showing anything worth watching on any of the three TV channels available. 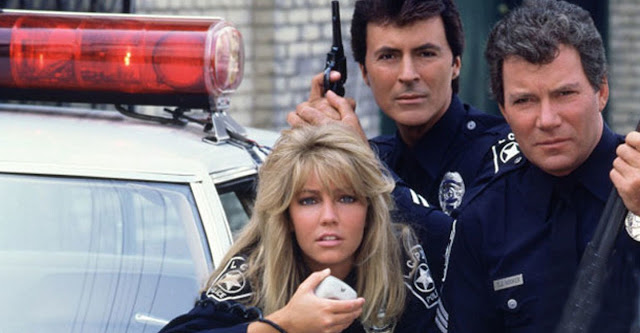 With shows like T.J. Hooker, Remington Steele, Joanie Loves Chachi, and Matt Houston, TV could be tough to watch. Even as a kid, I knew these shows were insultingly bad. So I would break out my comic books and glance through them, read a story or two, and marvel at some of the amazing art on display. And I'm still at it, even though we now live in the golden age of television, and the comic books I'm glancing through are scans I find on the Internet. So why in the name of hell am I doing this? You may well ask - I'm asking myself - and I am finding it more and more difficult to answer. I guess 2000 AD just has a special place in my heart, and always will.


This week's cover is drawn by Redondo, one of my favourite artists, and looks great. However... It might look great, but it is very problematic, like a lot of popular culture was back then, and still is - a lot of the time. The bad guy - an alien spider possessed by the ghost of the evil dictator who rules future Earth, of course - is using a time honoured threat, used by bad guys throughout the ages to get heroes to do what they want them to do.

"Stay where you are, or the girl dies," he says. Indicating that this is a textbook damsel-in-distress situation.

This is a trope so old and well known that it even has a Wikipedia page. The page says: The damsel-in-distress, persecuted maiden, or princess in jeopardy is a classic theme in world literature, art, film and video games; most notably in those that have a lot of action. This trope usually involves beautiful, innocent, or helpless young female leads, placed in a dire predicament by a villain, monster or alien, and who requires a male hero to achieve her rescue. Here the damsel is threatened by a bad guy that is a villain, monster, and an alien, so at least it's good value.

After opening the comic book up, the fist story is Ace Trucking, a fun strip about dueling space truckers, inspired by such movies as Convoy and Smokey and the Bandit, which were hugely popular at the time. The action this episode is mostly slapstick, but it's not bad slapstick.

Next we get a Future Shock, which is a short story segment used to give new artists and writers a shot, before moving them to one of the popular strips. Over the last few issues, a lot of these one shots have been written by Alan Moore, who is not to my taste. Here he is again, teamed up with a quite pedestrian artist, and he doesn't even manage to give his short story a twist. This seems to be a period where he was trying to do sci-fi humor, like Douglas Adams, and spectacularly failing.

Next comes Judge Dredd, with part 13 of a story about his future city getting invaded by Russians. It is a good idea for a Dredd story, but way, way too long. Thirteen episodes of this is more than anyone should have to wade through, and even the usually reliable Ezquerra looks like he is getting bored. Some of his art looks a little phoned in this issue. 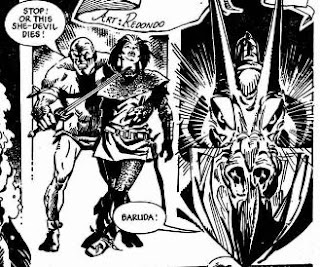 Next comes Nemesis the Warlock, which is the story the damsel in distress on the cover comes from. She is threatened in a "or the girl gets it" moment not once but twice, and she's the only female character in any of the stories, in the entire issue. Thankfully this story arc is wrapped up (with a nothingburger of an ending). The bad guy escapes as an evil spirit, so we know Nemesis will eventually be back.

Then comes Rogue Trooper, where the hero is battling some subhuman, primitive type of war clones. The way the artist this week has chosen to draw them, and the leader of the enemy forces, looks extremely racist to me and, along with the sexist cover, this issue is really leaving a bad taste in my mouth. 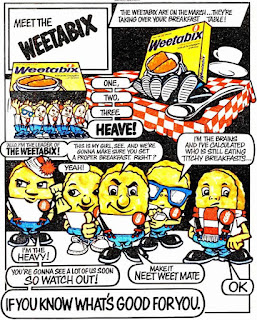 This is all rounded out with a full page advert for a breakfast snack, where the breakfast biscuits are anthropomorphized as skinheads, for some reason. Skinheads... Of all things!
Uncarved goes into more detail, describing the gang thusly:

The gang were dedicated to the extermination of “titchy breakfasts” and there was a distinct hint of the old ultra-violence in their “If You Know What’s Good For You” catchphrase. In the early 80s the skinhead cult was huge, and associated with all sorts of yoof-culture moral panic in the tabloids. Which means this ad was either an astute way of winning the target audience’s hearts and minds, or some kind of bonkers coke-fuelled recuperative initiative aimed at clawing back sales lost to accursed rivals such as Quaker Oats and their Honey Monster.

Wikipedia also talks about the skinhead youth subculture. It says:

As the 1970s progressed, the skinheads became more politically active and acts of racially-motivated skinhead violence began to occur in the United Kingdom. As a result of this change within the skinheads, far right groups such as the National Front and the British Movement saw a rise in the number of white power skinheads among their ranks. By the late 1970s, the mass media, and subsequently the general public, had largely come to view the skinhead subculture as one that promotes racism and neo-Nazism. 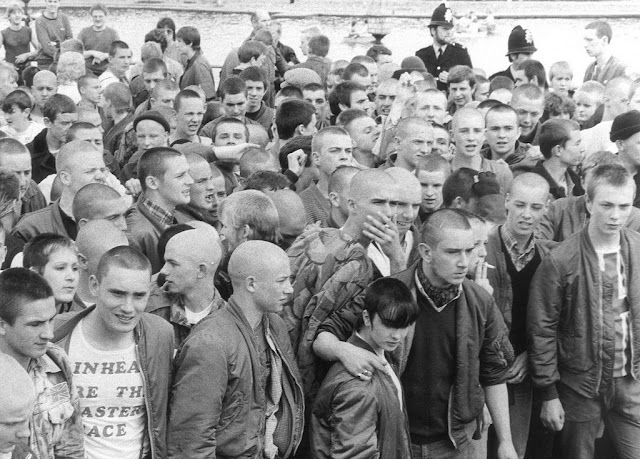 So some advertising agency thought this was an ideal look to promote breakfast snacks? Yeesh.

Weetabix soon retconned the gang, claimed they were never really skinheads, then had them do some breakdancing before they dropped the whole idea entirely.

So, not a fun read, this time. It's impossible to ignore the sexism and racism this issue is shot through with, because nobody seems particularly to be trying to hide it. But is that going to stop me reading the next one? Probably not. Political correctness and alternative comedy started to hit the UK soon after this, in the early to mid eighties, and that did feed through to comic books like 2000 AD, eventually.

2000 AD isn't going to suddenly become woke over the next few issues, but it will slowly change for the better. This, however, was a low point, a bad one. Let's hope there aren't too many more like this to come.
Labels: 2000 AD British Comic Book Prog Slog