I write a lot about ancient issues of 2000 AD, (I have a 2000 AD page where I link to all the posts). I have been expending a lot of ink (of the digital variety) complaining about the run of 'super covers' during this period of 2000 AD. I would much prefer to see some amazing art by McMahon or O'Neil depicting Judge Dredd, but instead we get these random sci-fi-ish images that have nothing to do with any of the comic book's stories and are justified with a short piece of fiction, like a few hundred words, on the editorial page. 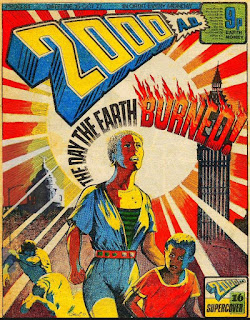 And yet, this image certainly has something interesting about it. It shows people on fire in London, and you kind of do want to find out why this is "The Day the Earth Burned". Also, the two characters on the cover are black. I was actually very intrigued, and found myself turning to the short story on the editorial page to find out what was going on, even before I read any of the comic strips, and that is the first time I have done that for any of these ‘super’ covers.

It turns out that the disaster depicted happens in 2010, which must have been an unimaginably futuristic date to the writer, back in 1977 when this comic book was published. It is now a decade in the past, of course, at the time of writing of this post at least. 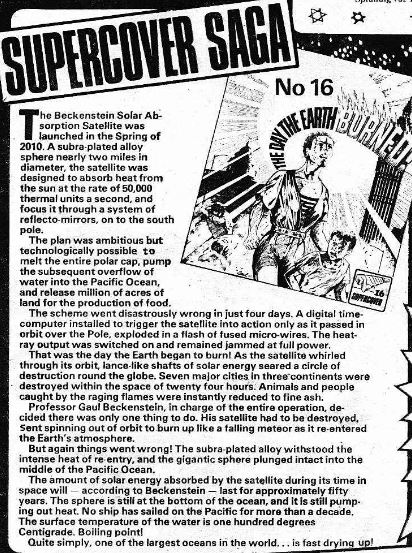 The science in the story is bananas, but in a good way. The basic idea (which is using satellites to collect solar energy and beam it down to Earth) is a good one, and there are certainly ways that it could go wrong, like in the cover image, but the purpose of the ray in the story is to somehow created farmland, and that just doesn’t make sense. The energy would be used for power, not for creating farmland. But it is an entertaining read, nonetheless, and one of the best of these 'super cover' art and fiction combinations. 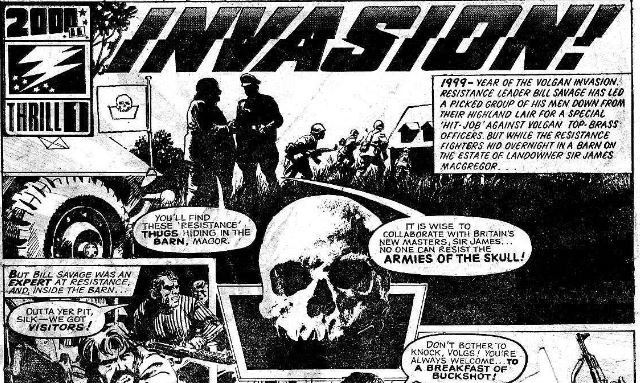 The first of the actual strips is, as always, Invasion, and it is a particularly gritty one this week, with a sketch of a skull that the artist took some time over, and plenty of class resentment against the British upper classes rolling over for invading Russians and selling out the working classes. That is just way too believable, with a Kremlin backed Prime Minister called Boris.

The tension in the story is supposed to come from the idea that we are supposed to believe Bill Savage might turn collaborator, or that at least his men might believe it, and both are laughable. We know from the start that the evil old lord of the manor is going to die, the only question is how, and how many Volgans are going to be killed at the same time. A crate of grenades turns out to be the answer, along with a dinner party's worth of Volgans. Great stuff. Oh, but when I say great stuff, please understand that I mean it ironically. This story was jingoistic, predictable, only featured white men, and was competently drawn at best. What I guess I mean is that it is a good example of the sort of stuff found in British comic books of this period, and that comes with a big hit of nostalgia for me. 2000 AD in general and Invasion in particular are problematic faves, to be sure. 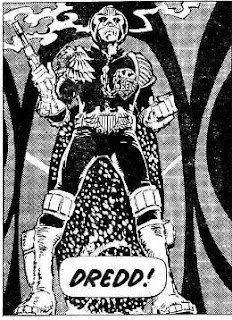 Next up is a classic Judge Dredd story featuring Mutie the Pig. This is just as much a product of its time and just as strange as Invasion, but instead of looking mostly to the past, as Invasion does with its reheated war stories given a sci-fi veneer, Dredd looks to the future. Dredd is a concept entirely new to the British comics of the era. It’s a story with a sci-fi setting baked in, but a new more cynical take on the future. The art is as cluttered, unpolished, and dark as that of Invasion but the story has mutants, a mega-city, and a futuristic paramilitary police force that looks less and less fanciful every day. The more military hardware finds its way into the hands of US police forces, the more they look like they come from Judge Dredd’s future. 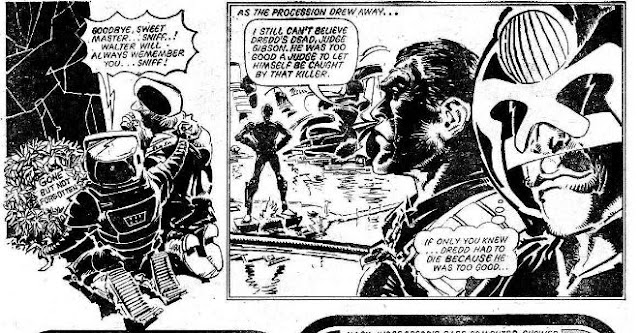 The art may be backward looking, too, but that is because it is early work by a truly great artist, a genius by the name of McMahon. His art will evolve from here, and keep evolving, becoming cleaner and more geometric, but I do love this period where he was influenced by the type of journeyman artist working on Invasion. 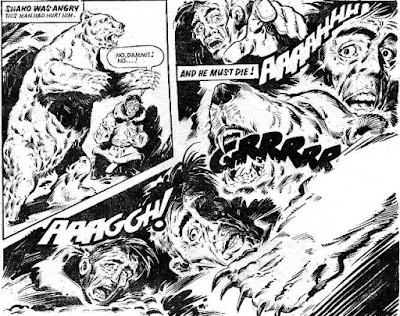 The next story, Shako, is another that is very much of its time. It is basically Jaws, but with a polar bear. It is a fascinating time capsule, but it gets repetitive and it is probably a good thing that it seems to be coming to its conclusion. 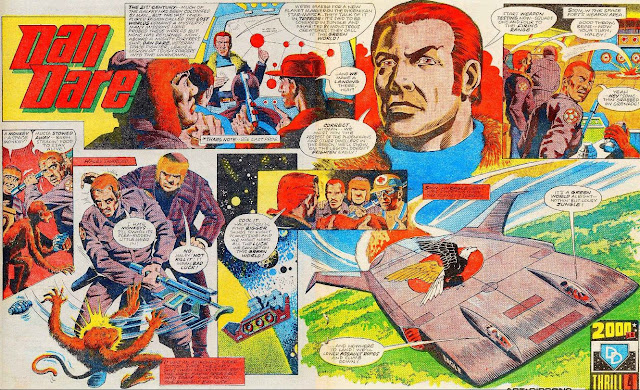 Dan Dare is next and it is space-opera in the grand style, except with no women or diversity. The art is tight and disciplined and there is a nice cliff hanger to end on. I enjoyed it but I can imagine how it paled in comparison to the other, gritty and bloodthirsty stories that surround it.

Mach 1 comes next, and I enjoyed this story. It all takes place on Everest and it revolves around a solar energy facility that has been built on the upper slopes. That's just bananas. This is episode one which means it was mostly all setup, and I can't wait to see where it is going from here. The issue finishes off with a jokey story about space vampires, made much more palatable by gorgeous art by Ezquerra. And there is a little gem on the back cover, a cutaway poster of Judge Dredd's gun. It doesn't make any sense at all as an actual gun design, but is very pretty as abstract art. 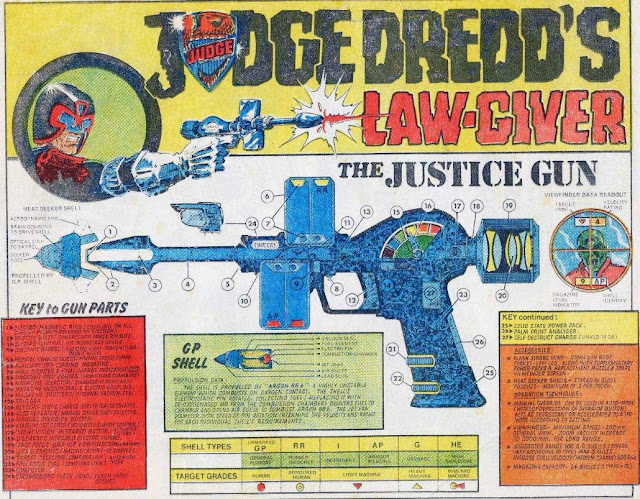