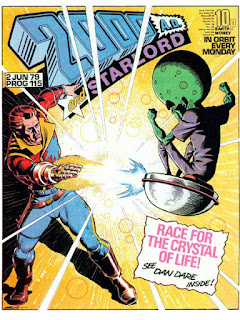 I write a lot about 2000 AD, it was a very formative experience for me, and I still read it today.

Continuing my quest to read every issue of 2000 AD – an impossible task – I have reached number 115. I have a 2000 AD page where I link to all the issues I have read, so far. After a run of classic covers, this issue has a very uninspiring image on the front. It features the silly old trope of attack beams meeting and canceling each other out. It’s also cramped and badly framed, so that even this hackneyed imagery is robbed of any drama. The hero shown here is Dan Dare, who has been with the comic book, off and on, since the very start. Dan Dare’s outfit is a pretty generic attempt to make him look like a Marvel superhero and his nemesis, the Mekon has rarely looked so silly. The picture does have a cheerful yellow background though, so it’s not all bad. 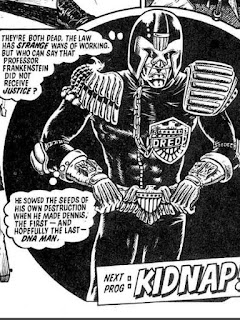 Art on the Dredd strip is by Brett Ewins, which suits the body horror vibe of the strip quite well. It’s not a classic, however, with a plot that is just a childish version of the Frankenstein’s Creature story. The mad scientist is even called Frankenstein, so it isn’t as if they are trying too hard to hide the story’s inspiration. Dredd doesn’t have to do a lot of detective work before finding the bad guy, taking us to the violent end of a story about cloning gone wrong. 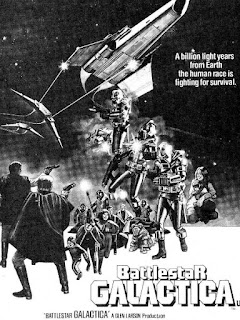 The next page is a rather beautiful poster for the Battlestar Galactica movie. We all remember the TV show, but it’s easy to forget the theatrical release. According to the NY Times: Once upon a time, in the far‐away galaxy called California, there was a television series called Battlestar Galactica. It was a very expensive series, and it was a flop. So the series was canceled. Then Universal took the three‐hour debut episode of the show and decided to release it in movie theaters to those same people who hadn't even liked the program for free. 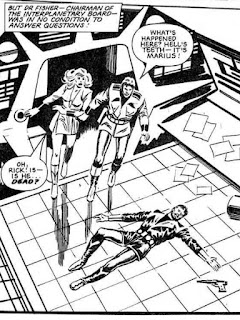 Rick Random is the next story, with its usual very stylized art. It all looks like it is happening on the extremely brightly lit set of a 1930s Saturday morning sci-fi serial, like Flash Gordon. One of the characters even looks like Ming the Merciless. It is truly old school, but the story is actually quite engaging and Random's female Dr Watson-type sidekick is a rare and welcome female presence in the very male stories of 2000 AD. 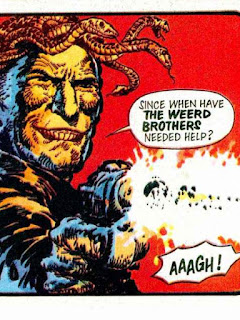 The Strontium Dogs are still in Hell, and the whole thing is degenerating into even more of an acid trip now. The art by Ezquerra is never anything less than amazing, however, and it is worth sticking with the story just for the images. His color spread – the only two color pages in the comic apart from the cover – is particularly attractive. 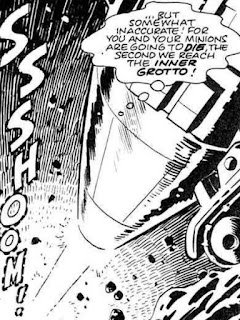 Then comes Dan Dare which is milking its extremely thin plot for another week of fairly random action. This week we have a big drill making a tunnel for some reason. The tunneling almost inevitably unearths a huge alien monster, which will have to be dealt with next week. 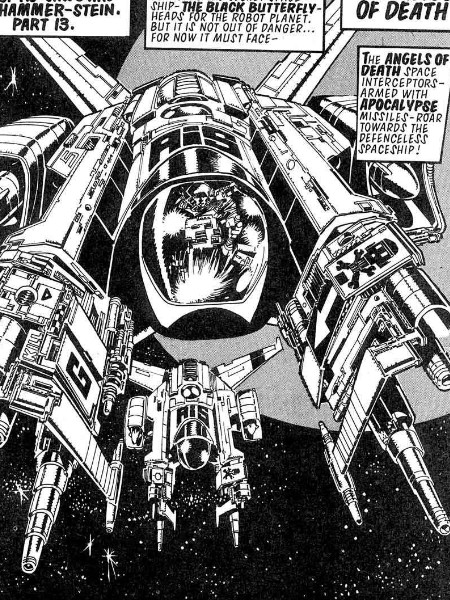 Then comes Ro-Busters, with space fighters, as imagined by the sublime comic book artist talent named Mike McMahon. They are absolutely glorious. They are such great space fighter designs. They might even be my favorite fighters, after the X-Wing. They don’t make much concession to being aerodynamic, for example, and it is very easy to believe that they have been specifically designed for use in space only, and are not designed to ever enter a planetary atmosphere. I love the outfits worn by the pilots too. They are the bad guys, but they are well designed bad guys. McMahon is again given plenty of mayhem to draw, and he does his usual excellent job of getting all the action on the page. 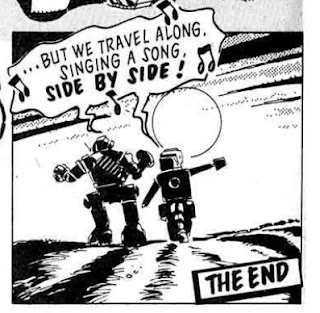 When this story ends it is quite emotional, because this is the end of Ro-Busters. It will never return in the form we knew it from Starlord. Hammerstein will be back in the A.B.C. Warriors, and Ro-Jaws will come back now and again, too, but the end of this story is a really moving moment, at least for me.