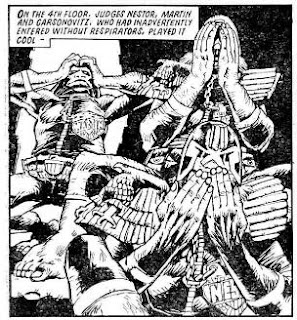 I write a lot about 2000 AD, reading it was a very formative experience for me, and I still read it today. I have a 2000 AD page where I link to all the issues I have talked about on this site, and I've written a book collecting the posts. 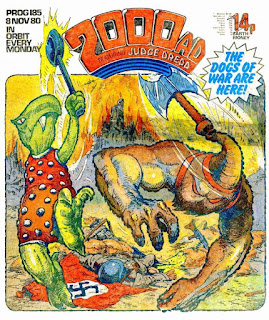 Issue 185 of 2000 AD comes from 1980 and it has one of the worst covers I can remember seeing since I started reading these old back issues, some years ago, now. It’s an image from the current Strontium Dog story, which is usually very dependable for cool visuals. The usual Strontium Dog artist, Carlos Ezquerra, is usually a pretty dependable artist, and the cover is skillfully drawn, but the image is just weird and bad. The green guy on the left seems to be a terrapin, wearing a studded bathing suit for cripes sake. The mutant on the right is a more traditional kind of monster, with an ax, but he doesn’t have a body. Just a head, two arms, and a tentacle coming from his scalp, which makes it hard to see how he survives. Where are his major organs supposed to be located. Like I said, just dumb.

As well as being on the cover, Strontium Dog is also the first story, and it is a time-traveling tale involving our future warriors going to Nazi Germany to fight Hitler and the Nazis. It is irredeemably terrible, and I have no idea why it was given a cover. The story gets back on track on the last page as our heroes return to the future, and we see a coll, cowboy-inspired mutant called Styx. 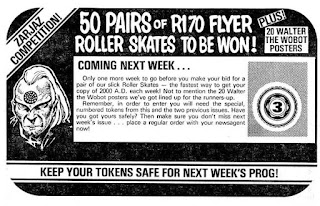 Mean Arena is next, and this is a story I often enjoy. Unfortunately the art this issue is not up to the usual standard. After that comes Dash Decent, a forgettable attempt at a single-page humor strip. Then comes something more interesting. There is a competition to win roller skates. Roller skating was big in the 1970s an and it is nice to see that the fad was still going strong in 1980. 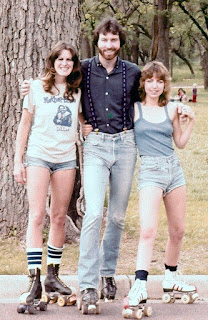 The comic doesn’t start hitting its stride until Judge Dredd, which is drawn by Mike McMahon, and in the panel below you can see the way he confidently combines red and green to show an explosion Dredd is caught in. The story is stupid, but the art is magnificent. The panel showing three judges, who have had evolution reversed, act out the see no evil, hear no evil, speak no evil thing, is just dumb. 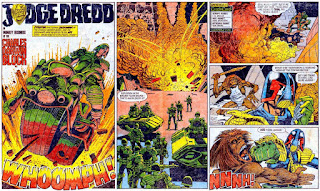 Then whatever claim the story had to scientific credibility completely goes out the window when a family regresses from monkeys to snake people. I’m no expert in evolution, but I don’t think snake people are represented in human DNA. 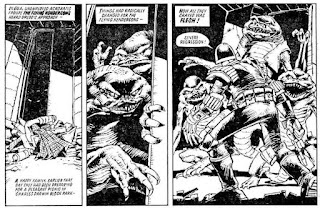 Then a new story starts, a story with a very intriguing title, Return to Armageddon. The start of the story is trippy and audacious. I found myself smiling as I read it. It looks like it is promising to be the sort of ideas-driven space opera, with a dash of horror, that I like, and that has been missing from 2000 AD in recent issues. Redondo is the artist, and his work is lovely. It is sketchy and free, but without sacrificing detail. It really adds texture to this story. 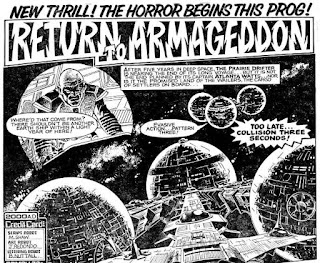 So much is set up in this first episode, that it feels absolutely packed in relation to the more expanded storytelling that is more popular in the comic books of today. A strange event throws the spaceship into a parallel dimension, conflict erupts between the crew of the spaceship and then a grisly discovery on an uncharted ice planet’s surface.

The world of this story is being built before our eyes, but using the story and art to show us rather than resorting to huge text boxes full of exposition to tell me. It is extremely high quality stuff.
In the last few panels, the story swerves toward being more esoteric, which I am not against, if done well. I am looking forward to seeing where this is all going.

The last story, Meltdown Man, isn’t great, and that is the end of issue 185, apart for some heavy pushing of the various Annuals being published for Xmas. I enjoyed this issue, which wasn’t a classic, but is worth a look for some classic McMahon art and the start of Return to Armageddon, alone.

To end, just a reminder that the best way to support this blog is to buy one of my books. Simply go over to Amazon, or Kobo and get one.
Labels: 2000 AD British Comic Book Comic Books