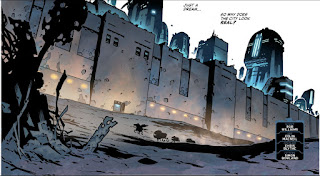 I'm jumping on at the most recent jumping on point of an old favorite comic book that I haven't been keeping up with in a while, a comic book called 2000 AD. I write a lot about 2000 AD on this blog because reading it was a very formative experience for me as a child. I have a 2000 AD page where I link to all the issues I have talked about on this site, and I've written a book collecting the posts.

I'm talking about issue 2184, where all the stories inside are starting at episode one. 2000 AD does these jumping-on points once or twice per year so that new or returning readers can easily get into the comic without feeling lost. For a jumping on point issue like this the editorial team also usually try to make sure the stories presented are cut above the usual quality, to make sure that new fans that jump on decide to stay along for the ride. 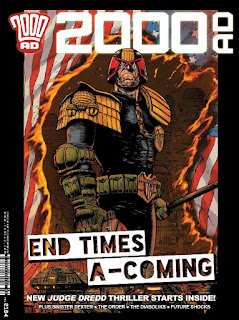 The cover is very generic, with Dredd posing against a background of Megacity One. For some reason it included the star and stripes on fire. I’m not sure what relevance such an ancient national symbol is supposed to have for the denizens of the far future city, but maybe the story inside will explain. But before we get to Dredd there is a short comic strip called Droid Life by Cat Sullivan which, as is traditional for 2000 AD’s comic strips, is not funny. But it is nicely drawn.

Then comes the first of the real stories, a Judge Dredd story called End of Days. I liked the way Megacity One is drawn on the first page by Colin Macneil, as a fortress, scarred by constant attack. I didn’t like the way Dredd is portrayed as a towering muscle man. I much prefer the skinny scrapper drawn by McMahon back in the 70s, but I guess we live in less nuanced times. I suppose the only way a modern reader can recognize a character as a hero is if he looks like The Rock. All in all this is an atmospheric beginning.

Sinister Dexter is next up, with its new story called Bulletopia. The art by Steve Yeowell is extremely generic, like an issue of a marvel title from the 1990s, or even before. 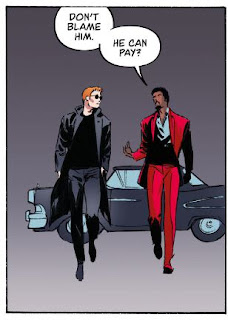 The story, judging by the art, also seems to be set in the 1950s, which made me think maybe it was some kind of time travel thing. But then they started talking about going to the old town to avoid ‘smart streets’ so I guess not. The future is just supposed to look like the past. As a jumping on point it didn’t give me much to go on to help me understand the universe of Sinister Dexter, except that is cyberpunk. 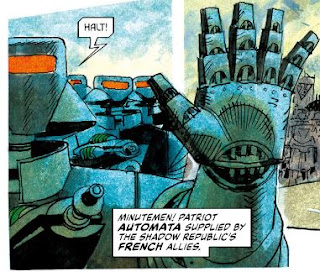 Next comes a strip called The Order, with the start of a story called Land of the Free. It is all painted by John Burns, which fits well for the ye olde world setting. Unfortunately the hero of the strip is Benjamin Franklin, and I hate stories based round real, historical figures. What makes the author think they have any insight into what Benjamin Franklin would do or say in any situation. None of it makes a lick of sense, but it is all action and there are robots, which is something I always approve of.

The Future Shock in this issue is inspired by the flat earth conspiracy theory, and for a future shock it has a decent twist ending, though it is more amusing than shocking. The art also looks great. It’s no classic, but I won’t spoil it because it really is a rewarding little read.

The Diaboliks is next, and apparently it is a brand-new series that spins out of the fan-favourite Caballistics, Inc. It was very strange to see because it is such a direct homage to an Italian comic book called Diabolik. Diabolik is an Italian comics series created by sisters Angela and Luciana Giussani. It was created in 1962 and is one of the most popular comic books in the history of Italian comics,. The series is about an anti-hero thief, depicted in monthly black-and-white comic books. Diabolik is a ruthless and cruel thief who robs and kills other criminals, constantly hunted by Inspector Ginko. With this series unavoidably in mind, and with a raised eyebrow, I dove in. It wasn’t great. There was a lot of ‘As you know...’ dialogue, and the main characters seemed to be immune from harm, which always takes a lot of the tension out of a story.

As a jumping on point this issue was disappointing, but strangely I do find myself wanting more. I’m going to be getting issue 2185, to see where all these stories are going, thou I’m looking forward to what will happen in some of them more than others. To end, just a reminder that the best way to support this blog is to buy one of my books. Simply go over to Amazon, or Kobo and get one.
Labels: 2000 AD British Comic Book Comic Books Sci-Fi