Here comes yet another blog post about an issue of 2000 AD, (I have a 2000 AD page where you can catch up on all the other posts). This time we're looking at issue 30, but why do I keep coming back to this ancient publication? To understand something as strange as issue 30 of 2000 AD, we have to travel back into the depths of history, to late in the year 1977. Back then the Sex Pistols were releasing singles, inflation had pushed prices up by nearly 70% in three years, Abigail's Party opened at the Hampstead Theatre, National Front marchers clashed repeatedly with anti-Nazi protesters, Silver Jubilee celebrations marked twenty-five years of Queen Elizabeth II's reign, the fake documentary Alternative 3 was broadcast, and immediately entered into the conspiracy theory canon, and the rock star Marc Bolan, pioneer of 1970s glam rock with T. Rex, was killed in a car crash. 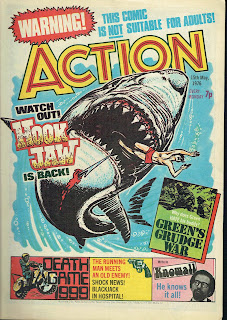 It was a strange and different time, and British comic books were different, too. They were gritty and action orientated. One comic book in particular, a title named Action, was intended to reflect the changing social and political times of the late 1970s. Many of the stories in Action were rip-offs of popular films. Hook Jaw, for example, combined environmental issues with the graphic gore and shark anti-hero of Steven Spielberg's film Jaws. The comic was instantly popular and within weeks the media had picked up on the title's violent content. The London Evening Standard and The Sun ran major articles on the comic. Over the next few months Action was the center of a campaign to ban it led by Mary Whitehouse, of the National Viewers and Listeners Association. Pressure from higher management resulted in the violence being toned down.


The creator of Action, Pat Mills, learned many lessons from the backlash against it, and he incorporated them into the launch of 2000 AD. By setting the comic's stories in a science fiction context, and creating the violent character of Judge Dredd as a law-upholding policeman, Mills hoped to avoid the controversy that had ultimately led to the demise of Action. Issues of 2000 AD from this period are as anarchic and gory as any comic book ever published. Few comic books were like it at the time, there has never been anything like it since, and that is why I think I keep coming back to it. 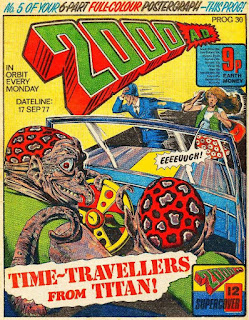 The cover of issue 30 looks like it was drawn by Brian Bolland, once again showing his limitations where it comes to using his imagination or drawing any kind of action. This is an early work, and he later learns to stick to static set pieces using characters designed by other people, which is where his talent for meticulously shaded and precise penmanship can really be shown off. This cover, where he tries to imagine what a time traveling alien from Titan might look like, and fails, is not playing to his strengths.

Invasion is the first story presented this week, and it continues the adventures of insurgents based in Scotland against a thinly disguised Russian invasion. It is a little too close to our current reality, as Moscow Boris and his oligarch chums just took over the UK, and only Scotland remains from whence to start to fight back. Boris used Facebook and racism rather than tanks and infantry, but otherwise the parallels are uncanny.

This is beautiful stuff, drawn by Pino, who combines a feel for action with nicely rendered military vehicles to create a beautiful slice of macho claptrap. This week he imagineers a cross between an F-16 and a jumpjet that looks great. 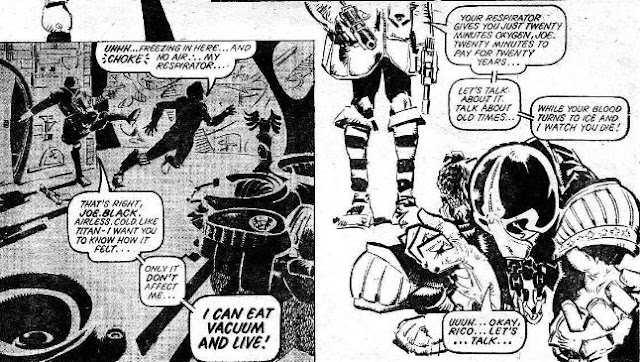 Next comes an absolute cracker of a Judge Dredd story. Mega-City One continues to gain in detail in these early stories, here gaining a space port, and so does Judge Dredd, here gaining a brother. It has always seemed strange to me that Dredd is called Joe, as ordinary a name as you could hope for, and yet his brother has the unusual name of Rico. I imagine it is some pop culture reference from the 1970s. Maybe he was named for the protagonist of Ricco the Mean Machine, a 1973 Italian-Spanish crime-thriller that achieved some measure of cult notoriety because of its violent and gory scenes. It's a revenge story, like this episode of the strip, and its gore would certainly fit with the 2000 AD vibe. 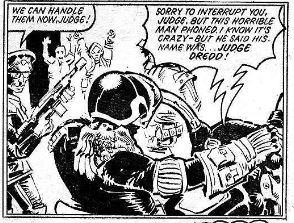 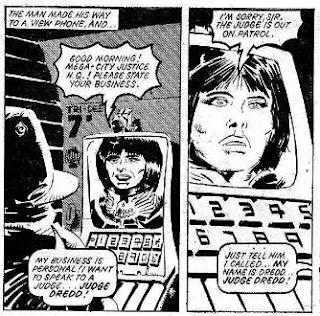 There are two female character in this story, one a secretary, the other a xenophobic caricature of an Italian housekeeper, and so there isn't any danger of this, or any other strip in this comic book, passing the Bechdel test. One of things that makes me saddest about 2000 AD, despite all the joy it brings me, is constantly being confronted with how monolithic and powerful the patriarchy was back in the 1970s. Its clutches can even be felt reading a comic book, created by cis white males for cis white males. 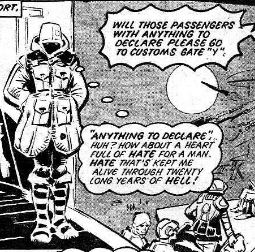 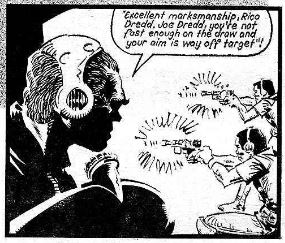 Part of the lore that has grown up around Judge Dredd is that, like the Mandalorian, he never takes his helmet off. Here however we do see a single panel depicting Dredd as a young cadet, alongside his identical clone brother. Two Dredd unmaskings for the price of one. We also see Rico, who we can assume has the identical face to Joe, unmasked in another single panel, just before he is sent to Titan. 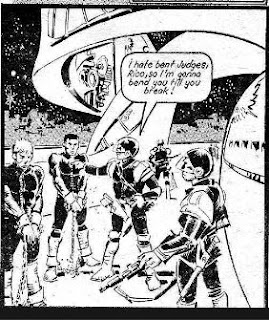 I doubt that McMahon put much thought into Dredd's look in either of these two portraits. Dredd was not the star character he would later become and everyone was expecting the comic book to get canceled and forgotten at any moment, so these depictions of Dredd are little more than sketches. He looks like a generic George Lazenby style action hero. 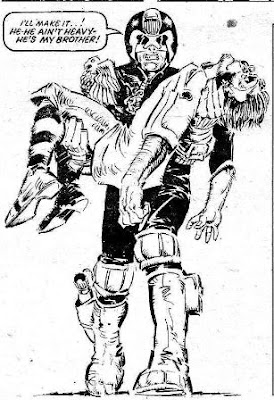 Dredd ends up shooting his own brother and carrying him away. It doesn't make much sense for Dredd to pick Rico up and carry him off, and it turns out it is just to do a stupid joke where Dredd says. He ain't heavy, he's my brother. Of course, He Ain't Heavy, He's My Brother was a song that became a worldwide hit for The Hollies, and was a hit again when Neil Diamond did his version in 1970. 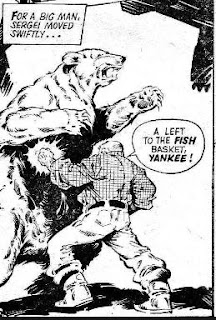 Shako comes next, and the polar bear hero of the strip is captured by commies. He is taken to a Russian ship and, in a story development that could only come in a gonzo action story of the 1970s from a British comic book, one of the Russians gets drunk and releases the polar bear because he wants to fight it. He is quickly killed and so we have the set up for Shako to work his way through the entire ship next week, killing and maiming Russian mooks. Storytelling like this, especially how gleeful it is, and how lacking in any tongue-in-cheek nods to its own stupidity is just jaw dropping, and you have to grudgingly admire it. I doubt we will ever see its like again.

Next comes Dan Dare, and where Shako is pure trash, Dare is all class. This episode is meticulously drawn by Gibbons, of Watchmen fame, and includes a bunch of sci-fi tropes, and a spaceship based on an Imperial Star Destroyer, but it is still its own thing. Here in an episodic, Star Trek, like format, it really works. All Dare needs is some diversity and female representation in his crew and he could come back today with virtually no changes to his concept. The only problem is that the strip is so skillful and derivative, and Dare is such an old-fashioned square jaw, that it might feel a little dull sometimes, like this one. Dare and his crew are threatened by a sea of sentient sand, which is a nice idea, but the writers don't manage to turn it into much more than a nuisance that Dare easily escapes by having someone come and pick him up in a shuttle. 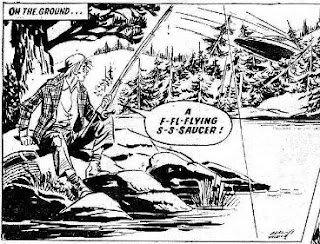 Next comes Mach 1, and this strip really no longer has any idea what it wants to be. It started out as a kind of super powered, gritty version of 007, but has been wildly shifting in genre since then. Here it is more like The X Files crossed with the Six Million Dollar Man. I’m not too upset about this because I like this new direction for the strip, and I hope they stick with it. It certainly gives the writing and art team less scope for awful national stereotypes than when Mach 1 was an international man of mystery.

The strip is very preoccupied with whether Mach 1 is having a close encounter of the first, second, or third kind, which is undoubtedly because this comic was published the same year as the movie, Close Encounters of the Third Kind, was released. The film tells the story of a blue-collar worker in Indiana, whose life changes after an encounter with an unidentified flying object, and it could not be a bigger influence on this particular Mach 1 story. 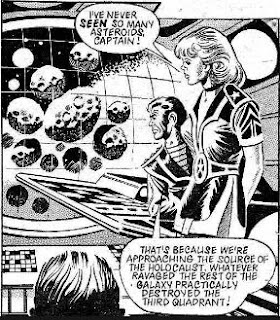 A beautifully retro-looking one off story comes next. It doesn't make any sense, and the big reveal, when we get to the obligatory twist to be found at the end of any sci-fi short story, is that what we assume to be Earth people are actually aliens. You can tell because their hands are hairy and they only have three fingers. It is stupid, but at least it looks nice and the spaceship crew actually includes women.

And there we have it, another prime slice of action from a classic issue of 2000 AD. They don't make comic books like this anymore, which is a very good thing when you think about the representation of women, people of color, and the LGBTQ community, but a little sad too when you think that nobody will ever take baloney like Shako or Mach 1 seriously as the basis for a story ever again. Luckily there are scans of all these old comics online, so we can continue reading as if stuff like this was still being written. It is a problematic fave but a fave nonetheless, and I am already loading up the next CBR file.