Before anything else, it is important to heap praise on the visuals of The Mandalorian, which stand up to the quality of the movies. The Mandalorian’s spaceship is a beautiful design, his armor is iconic, and they are seen against striking backdrops, such as stark vistas of ice and snow. Every episode also ends with evocative and poetic concept art during the end credits that is reminiscent of the original art done for the very first Star Wars movie. And, while lots of what you’re seeing on screen is familiar, the music makes the show feel fresh and new, while still having, at least to my ear, a retro sci-fi movie vibe. There’s no crawl, however, which is a disappointment, because the crawl would have been so perfect for an ongoing TV show like this, but despite this omission the sheer ambiance earns the show a huge amount of good will. But then the pilot starts, and the first fifteen minutes of actual action, plot, and dialogue are incredibly bad.

I’m guessing the first scene, for example, is intended to set up the idea that the Mandalorian is very good at his job. He swaggers into a bar, guns down some people, and takes his first captive. But these bar patrons are no threat to him, and so watching him execute them, going so far as to chop one in half using an iris door, is extremely unsettling. It leaves you wondering if he is supposed to be a hero or a villain, but not in a good way. The bad writing continues in the very next scene, where the Mandalorian takes his abductee, a blue fish person played by Saturday Night Live’s Horatio Sanz, to his spaceship. This is clearly intended to be funny, but it is not. The ‘jokes’ about having to poop are very broad, and the Mandalorian is so passive in the scene he could be replaced by a standee.


The Mandalorian is seconds later surrounded by storm troopers and outnumbered, but is unconcerned. In fact the people in the room seem to be worried for the safety of the storm troopers. That is a level of respect that should be reserved for heavy hitters like Darth Vader, and is very much not yet earned by the Mandalorian only minutes into his pilot episode. The officer in command of these troops, it turns out, has a job for our Mandalorian. I was marveling at how terrible the writing in this scene was, like somebody took notes at an RPG session (specifically the part where a mission is being given by an NPC patron to a player who thinks his character is way cooler than it actually is) and the realization dawned on me that this series was not going to pass the Bechdel test, which is just unacceptable in modern TV. 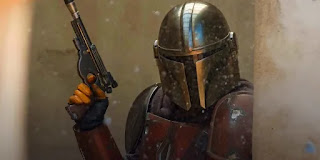 Then... after cringing through the first fifteen minutes, I started to enjoy what I was seeing. There are flaws, stupid tropes, and bad writing, but if you accept these problems, this series takes wing. From half way through the pilot, things start to swiftly improve. After accepting his job from his patron, the Mandalorian goes off to a new planet and encounters creatures called blurrgs. The Mandalorian is for the first time presented as an actual person as he slowly befriends the creature.

The pilot ends with a classic western showdown where the Mandalorian teams up with a bounty hunter robot called IG-11 and they take on an entire fortress. This scene is another patch where The Mandalorian falters, mixing uninspiring action with humor that is a little too obvious and broad. And again there are no stakes. Not for one second do you believe that an entire fortress of bad guys is any threat to either the Madalorian or his assassin droid friend. The worst part is the moment the Mandalorian uses a massive laser Gatling gun to wipe out a score of bad guys, accompanied by rousing music. The director obviously wants the audience to be punching the air at this point, but with no real threat being overcome, combined with the Mandlorian’s merciless rampage that leaves everyone dead, that just doesn’t work. You can't cheer on this kind of massacre. All this is constantly interrupted by IG-11 continually saying he’s going to self-destruct, which makes no sense at all. Why would a killer robot be so suicidal. The Mandalorian also reveals himself to be prejudiced against droids, the most overt Star Wars version of racism, as the writers do all they can to stamp out any shred of sympathy you might have for this guy.

After all that, though, there comes the giant reveal, and this show, which had been on extremely shaky and tonally mixed ground, finally finds its heart. It turns out that the Mandalorian has been sent to retrieve a baby Yoda. 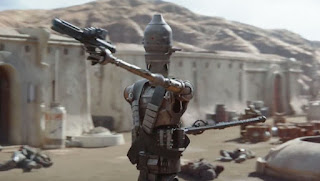 Going into episode two, the Mandalorian is no longer the invincible badass power fantasy he was in episode one. He gets his ass kicked on a couple of occasions, and he is all the better for it. I, for one, was glad he couldn’t take on an entire Sand Crawler full of Jawas on his own. I was glad to see a scene where he was actually injured and had to stitch himself up, where his armor was damaged and he had to fix it. There needs to be a limit to what a character can do, otherwise there are no stakes. 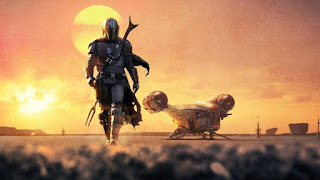 And so the second episode ends with that titular child sleeping peacefully as the Mandalorian flies away in his newly repaired ship, and I fervently hope that it will continue on the firm footing it is now on, after the decidedly shaky start that was the pilot.

To end, just a reminder that the best way to support this blog is to buy one of my books. Simply go over to Amazon, or Kobo and get one.
Labels: Sci-Fi Serial sci-fi TV