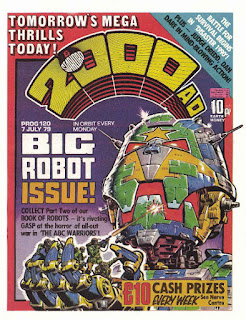 Issue 120 of 2000 AD has a beautiful cover, but it doesn’t have anything to do with any of the stories inside the comic. I hate it when 2000 AD does this, even if the art used is objectively very nice, like this colorful, giant robot about to crush, or maybe even eat, a platoon of US marines. I remember being disappointed, back when I bought this comic book on 7 July 1979, because I was expecting the giant robot to appear in ABC Warriors, but it did not. I also don’t like the red frame round the cover, so not one of the best. I have a 2000 AD page where I link to all the issues I have talked about on this site, many with better covers than this. 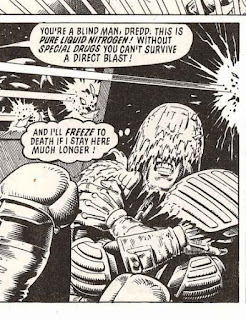 Judge Dredd is drawn this week by Brian Bolland, and there are showgirls in a funeral home, probably as some kind of commentary on the commercialization of death. It’s a clever story about people being frozen to avoid death, and things get chilly for Dredd too. Even so, having female assistants in fishnets is sexist, and the story by John Howard isn’t quite as clever as it thinks it is.


John Howard is a name used by John Wagner, and Judge Dredd is a character he created, along with artist Carlos Ezquerra. It was Wagner who suggested that 2000 AD needed a cop story, and his proposal, "Judge Dredd", took the Dirty Harry archetype and ran with it, imagining a violent lawman, empowered to dispense justice on the spot in a future New York. His characters had a huge impact on my childhood, and he is certainly a talented writer. I only wish his writing from the late 1970s could have been a bit more progressive in its sexual politics and diversity. 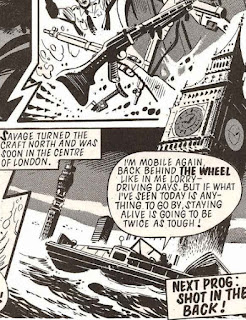 The next story is Disaster 1990! and I am not usually a big fan. The story shows Bill Savage grabbing himself a cool amphibious vehicle. As Disaster 1990! stories go, this one is actually not bad. I very much enjoy seeing Savage driving his new vehicle, an iconic DUKW past Big Ben. The DUKW was colloquially known as Duck and is a six-wheel-drive amphibious truck used by the U.S. military during World War II. 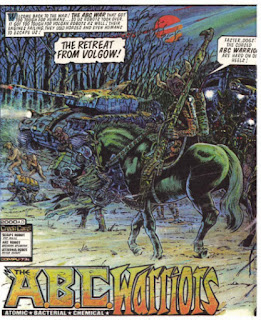 Next comes ABC Warriors, drawn by Brendan McCarthy this time, so it is a lesser installment. ABC Warriors only really reaches its full potential when drawn by one of the two big beasts of robot mayhem, Kevin O’Neil and Mike McMahon. The art of Brendan McCarthy has its charms, and he is a very talented colorist, but he just doesn’t compare to O’Neil or McMahon. 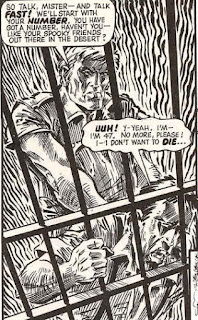 After seeing who was doing the art, I must admit I was more looking forward to reading Project Overkill than ABC Warriors. I don’t remember it at all from the first time I read it, but I am enjoying rereading it over again now. This episode, the hero is thrust even further down a rabbit hole that is still very far from revealing its secrets. The art doesn’t give Gibson any opportunity to indulge his cheesecake urges, and so it fits the story extremely well. It’s not a classic of 2000 AD, and made very little impression on me at the time, but it is nice and readable. 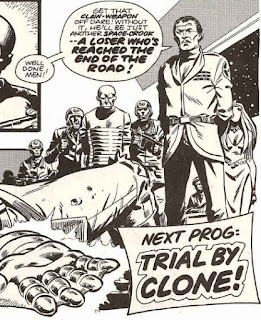 Dan Dare comes next, and after a promising episode last issue, it gets bogged down again as Dare gets taken off to court to answer for crimes he committed while under mind control from his nemesis. I guess that’s an interesting concept, but a court case doesn't have much action. One intriguing aspect is that next week’s installment is called Trial by Clone. I’m already wondering how they are going to incorporate a clone into a trial. 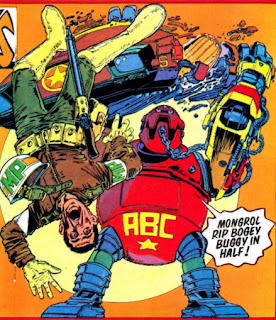 There is some nice art in the issue of 2000 AD but it is not a classic. It has an anonymous cover and ABC Warriors hasn’t quite gotten into its stride yet. Some classic issues are coming soon, but this isn’t one of them. In fact, I couldn’t help but take a peak at what is coming next week in ABC warriors, and it is a doozy. We will be getting Mongrol. I can’t wait.