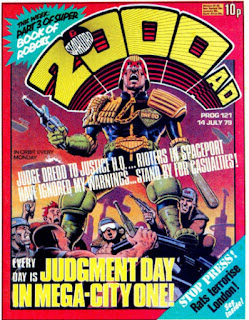 I’m reading issue 121 of 2000 AD courtesy of a bunch of scans I found at BritishComics on Wordpress. It is full of information about British comics along with the comics themselves, as scans for download. They have all been collected from various sites, internet archives, Usenet Newsgroups and torrents to be preserved and to be enjoyed. I have a 2000 AD page where I link to all the issues I have talked about on this site. 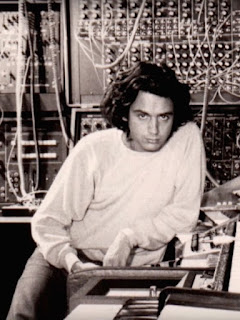 This particular comic book came out 14 July 1979, so if you want a soundtrack to listen to while reading it, then try Jean-Michel Jarre, the French pioneer of electronic, ambient and new-age music, who is also known for organizing outdoor spectacles featuring his music, vast laser displays, and fireworks. On July 14 1979 the first of these ambitious shows attracted an estimated audience of one million people. Jarre was alone on stage with his synthesizers, performing Oxygene and Equinoxe. 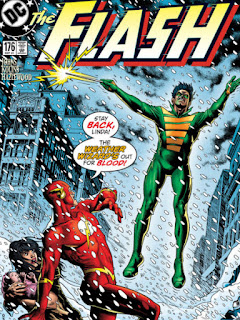 This issue of 2000 AD has the comic book’s star Judge Dredd, the closest analogy to an American superhero the comic has, front and center, drawn by Brian Bolland, an artist who would go on to make it big in the USA drawing just such covers for the real American comic book heroes, such as The Flash. 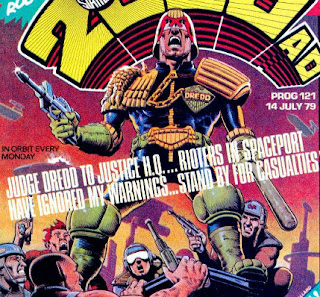 Drawing the human form and shading and painting it to obsessive perfection is something he does well. But the worlds these people inhabit seem a little simplified, like an early Pixar rendering, where objects are all abstract shapes, beautifully shaded but lacking in detail. Here Bolland has solved his problem of too much detail throwing off his ability to shade everything to the level he likes by tilting the camera up at the sky, where we see rocket ships as smooth and lacking in features as something from a 1950s sci-fi movie. My gripes about Bolland aside, this is a great cover. 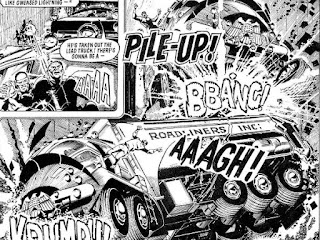 Inside the comic, art duties are taken over by Ron Smith, but the similarity to a superhero comic book remains. Ron Smith has his faults as an artist, being fond of making his figures fleshy and frog-like, almost as fleshy as Rubens, but he sure can draw vehicles. This issue, for example, has a particularly nice one. 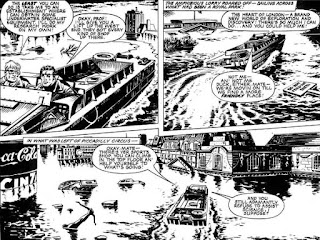 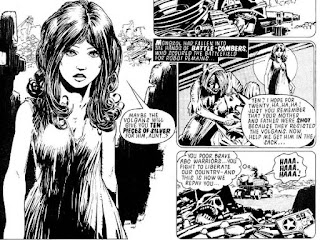 McMahon is back doing the art on the classic ABC Warriors arc where Mongrol is added to the team roster. It’s a strange story, which if filmed would have to be a co-production between Industrial Light and Magic to render believable robots and Hammer Horror for the rest of the elements in the story. The story starts with a robot that is found so badly damaged that only its head remains. 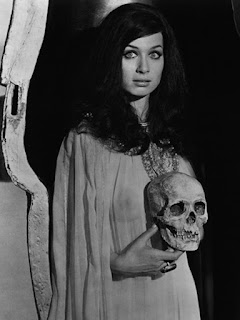 This head is then found by Lara, who resembles Hammer Horror actress, Valerie Leon. The picture of Leon I’m using here is from Blood from the Mummy's Tomb, a 1971 film that was loosely adapted from Bram Stoker’s novel The Jewel of Seven Stars. 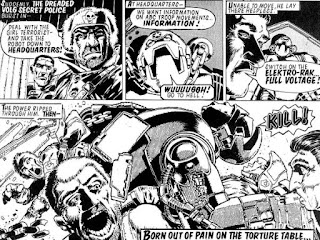 Lara builds the busted robot a Frankenstein body but she doesn’t have enough power to jump start it. It is only when she and her robot are captured by the Volgans, who start torturing Mongrol on the Elektro-Rak, that Mongrol comes to life. It’s a beautifully drawn scene, that captures the horror of a Frankenstein monster's first moments. Unfortunately, by this time, Lara has been fridged and will serve as Mongrol’s motivation forever more. It is very simple and emotive storytelling, and it does not even come close to passing the Bechdel test or even avoiding some of the more problematic comic-book tropes out there, but it is absolutely beautifully drawn. I remember being very moved by it as a ten year old. My lip was wobbling and a tear came to my eye at Lara’s demise. I guess it was my first exposure to the fridging trope, and some tropes are tropes for a reason. This one sure worked for me. 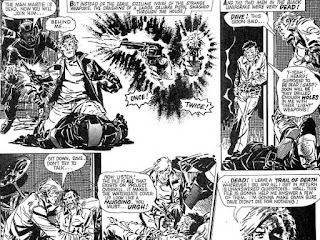 The next story is Project Overkill, which I am enjoying, especially because I had forgotten it existed, so it is still full of surprises for me, unlike some of the other strips that I know by heart because they made a bigger impression at the time and I have re-read them many times in reprints and collections. It is also drawn this week by an artist I haven’t seen much of in recent issues, a guy called Redondo. He will always have a special place in my heart after the beautiful work he did in Starlord, on the Mind Wars strip. This issue turns out to be a flashback explaining how our pilot hero came to know a C.I.A. colonel who can help him. The C.I.A. Colonel has a file on project Overkill, but the forces of evil try to get to him before our pilot hero can. But our hero gets the file in the end. I’m enjoying this story, and I can’t wait to find out what Project Overkill is all about. I hope there is a good reason they didn’t just kill the pilot right at the start of all this, other than that then there wouldn’t have been a story. 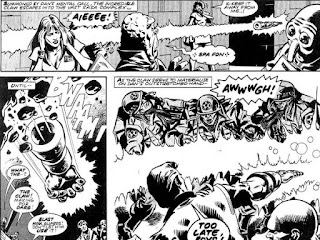 Dan Dare comes next, and the Cosmic Claw he has been given is shown to be even more powerful than we had previously guessed. There is a cool sequence where the claw flies back to Dare, and rejoins him, allowing him to use it to fire energy beams. I remember as a kid that I very much wanted my own Cosmic Claw, and this was the point where I really started to warm to this version of Dan Dare. It certainly isn’t the traditional conception of Dare as a pilot of the future. But I like this superhero version even better. 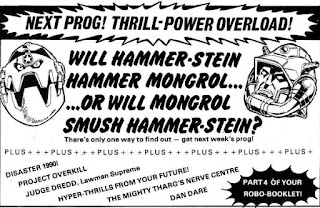 This was a great issue, or prog in the comic book’s own jargon, and thoroughly entertaining to read. I’m already looking forward to the next one.