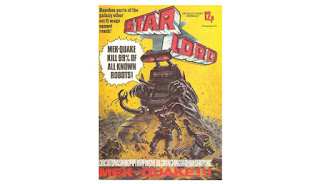 I am currently rereading an old comic book from my childhood called Starlord. This is the nineteenth issue, which came out on the 16 September, 1978, and I'm enjoying reading it all these years later.
And you can read this vintage comic book too, because scans of the entire run of the comic are available at Starlordcomic.com.

The issue I'm looking at in this post has an absolutely great cover, with bold colors and an energetic painting style that I like very much. It also relates to one of the stories inside, Ro-Busters in this case, instead of just being some random piece of sci-fi art, which makes the comic more cohesive. I much prefer a cover that has at least something to do with what is inside the comic book. Ro-Busters is a story that is similar in premise to that of the Thunderbirds television series. It is about the de-commissioned war robot Hammerstein and the sewer robot Ro-Jaws, and their adventures as they are sent to help during disasters. The shapes and dimensions of the robots involved have been exaggerated, turning the big robot, Mek-Quake, from his real size, only a little bigger than a pickup, up to building size. The cover also shrinks the two robots being menaced, Ro-Jaws and Hammerstein, virtually to toys. This works really well to emphasize the threat Mek-Quake poses. In the image, Mek-Quake seems to be projecting a wave of yellow destructive force, something it absolutely is not really capable of. This bothered me when I read the comic book as a child, I remember, but I can now see that it is a valid artistic choice. This really is an excellent cover, and I'm feeling very positive about the strips to be found within the comic book. 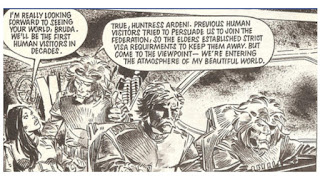 As always, Mind Wars is the first strip presented in the comic book. It is also the story that is most closely modeled on Star Wars, which was taking the world by storm around the time that this comic book was published. In the previous eighteen installments, the strip has been a non-stop cavalcade of planet hopping, mind powers and space battles, just like the movie it takes its inspiration from. It is never less than fun, and often much more than that. The pen of Jesus Redondo comes up with beautiful vistas for all the exotic locations, and he can do technology, too. 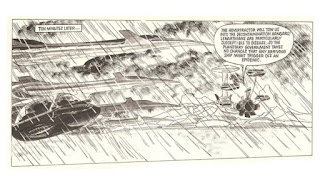 Here is a nicely imagined star port, that looks like an airport. It's quite low tech, and I think it's very appropriate for an out-of-the-way planet. Redondo's art also has a casual, but not titillating, attitude to both male and female nudity. 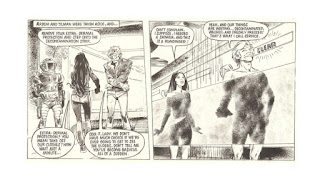 In this episode Tilman (a sort of secret agent Han Solo with a big mustache) and the female hero Ardeni (a woman with mind powers) are both sent together naked through a decontamination shower. To a young boy like I was back then, brought up in prudish 1970s Britain, it seemed like behavior just as alien as the exotic creatures and huge spaceships. The idea that people would be so comfortable with their own bodies that men and women would be happy to strip down in the middle of the terminal and go together through a decontamination shower was mind boggling. 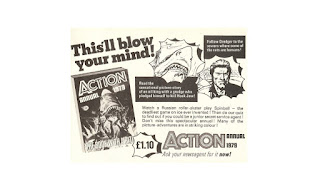 Then we have the conclusion of the underwhelming Ro-Busters story that has been running for a few weeks. It's been a big waste of the characters Ro-Jaws and Hammerstein, but hopefully next week's story will see them get back to form.

And then we get something special, an advert for the Action annual. I remember the Action comic very well because of its star, Hook Jaw. Where Starlord, and Mind Wars especially, was influence by Star Wars, Hook Jaw was influenced by Jaws. Jaws was directed by Steven Spielberg and features a giant man-eating great white shark that attacks beachgoers in a fictional New England summer resort town. The art department's mechanical sharks suffered a lot of malfunctions, so Spielberg decided to mostly suggest the animal's presence with music to indicate the shark's impending appearances. The film was given an exceptionally wide release over 450 screens, accompanied by an extensive marketing campaign with a heavy emphasis on television spots and tie-in merchandise. Jaws was the prototypical summer blockbuster, and is now regarded as a watershed moment in motion picture history. It was the highest-grossing film of all time until the release of Star Wars.

Action was a controversial weekly comic book that was first published on 14 February 1976. The comic was withdrawn from sale on 16 October 1976 because of its violent content, but then reappeared the following month, in toned-down form, and continued publication until late 1977. Despite its short lifespan, Action was highly influential on the British comics scene, and was a direct forerunner of Starlord and 2000 AD. Even though the comic had died for good the year before this issue of Starlord was published, there was obviously enough name recognition for an annual to be produced. 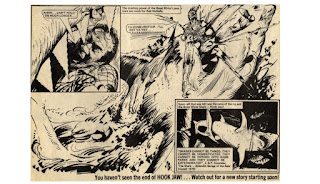 For me, the star of the comic book was Hook Jaw, quite obviously created as a Jaws cash-in. Hook Jaw is a Great White Shark and, even though he spends most of his time eating the human cast of characters, he is the hero of the series. The name Hook Jaw comes from the gaff hook stuck in the shark's jaw after some fisherman tried to catch the creature shortly before being eaten by it. Hook Jaw ate corrupt humans seeking to exploit the seas, as well as anyone else unlucky enough to get near him. After the ban he no longer ate as many people and if he did it was off panel. Anyway, apart from this annual Action was no more, so back to Starlord. 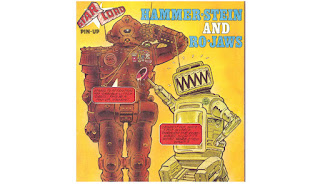 On the back cover is a poster featuring Ro-Jaws and Hammerstein, drawn by their creator, Kevin O'Neil, and it is a masterpiece. O'Neil doesn't do dynamic poses, or at least they don't come easily to him. What he does do is detail, lots and lots of inventive detail. Comparing this image with the cover is fascinating, because it features the same two robots, but they could not be depicted in two more different styles, except perhaps if one image were to be painted by a cubist and the other was done on an Etch A Sketch. The cover is the better picture, while the pinup is the better picture of the two robots, if that makes any sense.

To end, just a reminder that the best way to support this blog is to buy one of my books. Simply go over to Amazon, or Kobo and get one.
Labels: 2000 AD British Comic Book Prog Slog Starlord