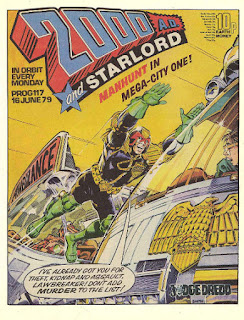 I am on a bit of a nostalgia trip at the moment, reading issues of an old comic book from my youth, and I have been for a while now. The comic book is called 2000 AD, and I’ve reached issue 117. (I write a lot about 2000 AD, and I have a 2000 AD page where I link to all the issues I have talked about on this site already). The cover of issue 117 is drawn by Ron Smith, who is an artist I have started to appreciate more and more since starting to read these ancient publications again, even though he wasn't my favorite when I first read the comic book, back in 1979. This is a wonderful image that captures some of the action from one of the stories inside the comic this issue, and allows Smith to show off his skill at rendering shiny, futuristic vehicles.


The story the cover comes from is the first one presented in this week’s issue, and it is a fun one. Judge Dredd sees a guy littering and yells at him to stop, but the man runs, committing ever more serious crimes as he tries to escape Judge Dredd. It’s a classic, and Smith’s art suits it very well. 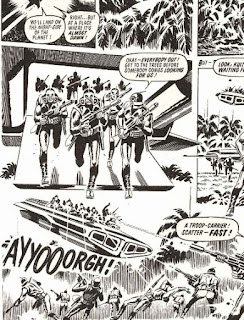 Next comes Rick Random, which goes through a very swift change of pace in this issue. It had started out as a detective story, but it now becomes a war story, just like a lot of the others presented in the comic book. It’s a little disappointing to see this quite unique strip becoming more like all the others. As I remember, this was a last ditch effort to garner some interest in the strip. It failed, and the story gets canceled in a couple of weeks. 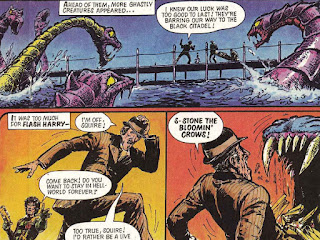 Next comes Strontium Dog, which is continuing its arc where the heroes have actually gone to Hell. It might be an alternate dimension that resembles our conception of Hell, but it is a fine distinction, and one that the story itself doesn’t spend too much time worrying about. Instead we get a lot of beautifully drawn action, with art by Ezquerra, who was born to draw Strontium Dog. 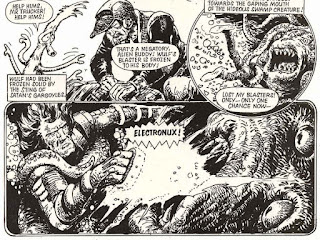 The story also shows Johnny Alpha using my favorite bloodthirsty invention from this ancient sci-fi comic book, the electronux. They don’t make a lot of sense, but they sure are cool. It also occurs to me that it might not be a great idea to use them underwater.

Dan Dare comes next, and it is beautifully drawn by Dave Gibbons, as usual, but it is just random action again. Dan is still fighting the same monster he started fighting two issues before, and he finally defeats it in a quite ridiculous way, using a very literal Achilles heel. 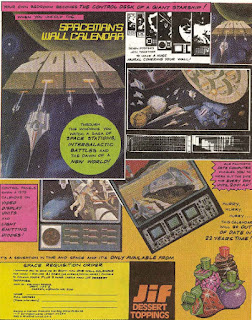 There has been a lot of action this issue, and a lot of great art, but all the rest of issue 117 is, for me, overshadowed by the advert on the back page. The adverts in these old comics from the late 70s are always interesting, but this one is even more so because it has a very special place in my heat. I actually filled out the little form and wrote away for the space calendar being advertised here. I pestered my mum into buying eight of the little plastic bottles of ice-cream topping and I collected the proof of purchase collars I needed to get my calendar. The dessert topping company were involved in a few sci-fi promotions at the time, including a TV advertisement that had the topping bottles flying like spaceships. 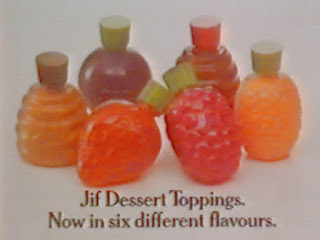 I’m not the only one who remembers this thing, either. Here is a blog post about the 1979 Jif Space Calendar. As the post explains: 3 paper labels from these things plus £1 got you a space calendar that would tell you what day a date fell on right through until '2001 ad'!

This was a great calendar, with parts that glowed in the dark, and I can still remember it in pride of place on my wall. It also made a storyline in Calvin and Hobbes more enjoyable for me. The arc is about collecting proofs of purchase to order a free gift, except Calvin wants a beanie not a calendar. In one of the strips from this run, Calvin excitedly tells Hobbes that he has eaten enough cereal and has enough proofs of purchase to order a beanie. Hobbes tells him it says to allow six weeks for delivery. Calvin is shocked! In six weeks, he'll be old. Hobbes pats his head and says his beanie will be the talk of the rest home. I remember being just as shocked as Calvin at how long my gift would take to arrive.