Issue 341 is the latest addition to my 2000 AD page where I link to all the issues I have talked about on this site, and I've written a book collecting the posts. Last issue the Slaine strip ended with a great cliffhanger, in fact it was so good that it is featured on this issue's cover. Belardinelli will always be second to McMahon as the lesser of the original Slaine artists, but this cover is still very nice. It’s static and posed looking, but in this context I like that. The static posing makes the cover image look like a classical painting of an important moment from history, which is very fitting for the Slaine strip. 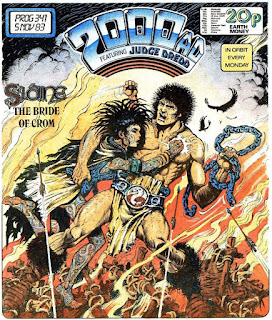 
Judge Dredd is, as ever, the first strip presented in the comic book, and although it is titled part seven of an ongoing story, it is also a self-contained adventure. The judges are dealing with a serial killer who uses a disintegrator to kill but leaves his victim’s left hands undisintegrated. The Judges can't work out what is going on, so they call in Anderson of Psi Division.

She speedily comes up with a description of his outlandish, futuristic outfit, which is a great detail, and, as always, I love how knee pads are such a fashion accessory in Megacity One. I remember wanting knee pads as a kid because I read this stuff. Luckily I never got my hands on any, I was weird enough without adding knee pads to the picture.

There's a great panel showing Lefty, the serial killer, being surrounded. It's a very cinematic shot. When I was a kid I didn't like Ron Smith's art, but it is growing on me the more 2000 ADs I read as an adult. The Night shift is finally over with episode seven. I was very impressed with the writing of this strip. The story has a real feeling of the mayhem of the shift winding down, and then comes the shocking end, where the judges are put in the sleep machine for ten minutes then sent right back out for the day shift. It is actually a very moving end to a poignant story. 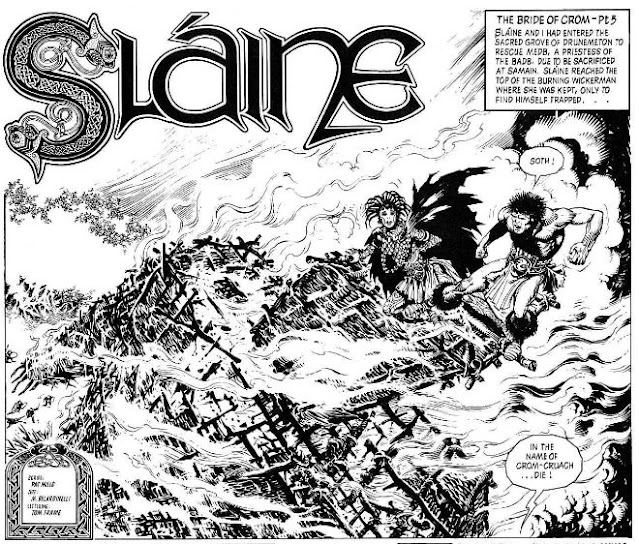 Next comes Slaine, and that great cliffhanger. Belardinelli uses some great perspective drawing to sell the danger Slaine and his damsel in distress are in. You really feel they are many meters above the ground. Slaine escapes by having one of his warp spasms, where he turns into a kind of mutant Incredible Hulk. It should be a bit of a cop out, but Belardinelli draws Slaine's warping and bulging flesh with such attention to detail that our hero's escape ends up feeling earned. The art is like something from a Cronenberg movie. Then a sorcerer raises some zombies to attack Slaine, and Belardinelli draws every flap of rotting flesh and every jutting bone of these zombies with loving attention to detail, while having a lot of fun with the way Slaine's form is warping.

Next comes Nemesis the Warlock, drawn by O'Neil. As always, the art is phenomenal, unfortunately... the sexual politics not so much. The humans are the baddies in this strip, which is fine, but they have organized their forces so that the men fight and the women are kind of medieval cheerleaders in chain mail bikinis. It's ugly and bonkers and insulting. It also lacks tension. One of the text boxes in the strip encapsulates this problem. It says, With the Dark Lord to lead them the Basilisk's victory is inevitable.

That's the problem with a strip where the hero has demigod-like powers. There is no threat and therefore no tension. You end up with a beautifully drawn, endless battle scene that is about as interesting as the Bayeux Tapestry. With such lax storytelling the strip lives and dies by its art. One misstep can be its undoing. Any let up in the genius of the grim-dark, medieval futurism of the art spells doom for being able to suspend disbelief. O'Neil has always been a master of detail, his concentration rarely slips, and the chiaroscuro is amazing, meaning the art holds you mesmerized, no matter how bad the story, usually... 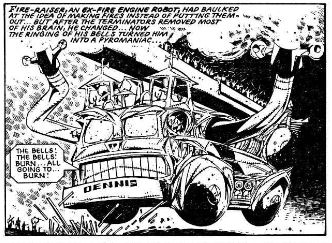 This episode includes a drawing of a fire engine, said to be from the ‘lost age of technology’, that is obviously intended to look impressive, but instead it looks like something from Thomas the Tank Engine. Suddenly, with this clown-car looking thing, the art loses its spell. It even has a Thomas the Tank Engine face on the front.

Strontium Dog, this episode, is still fighting a bad guy who is a mix of Fagin and Ming the Merciless. This kind of stereotypical bad guy wasn't okay in the 30s, when Flash Gordon was dealing out two-fisted justice to racial stereotypes, and it certainly isn’t okay for art created in the 1980s. I was enjoying this issue up to this strip, but unfortunately this unpleasantness means the comic book ends on something of a sour note. Compared to the opening Judge Dredd strip, which includes a female character with a role to play that does not depend exclusively on her gender, the stories that follow go progressively from bad to worse.

There is one more strip before the end of the comic book, and that is Rogue Trooper. No matter their other faults, the art on the other stories has been consistently excellent (apart from that fire engine). The art of Rogue Trooper this issue is not up to the same standard. It’s by Boluda, and just isn't great.

One of the soldier sings a version of I Talk to the Trees, which according to the Muppet Wiki is Link Hogthrob's singing debut, which he performs while wandering through a forest. Contrary to the lyrics, however, the realistic-looking trees not only listen to Link but talk back. Interrupting the song after its second line, they express their distaste with the number and immediately shuffle offstage.

Okay, that’s enough of issue 341 of 2000 AD. To end, just a reminder that the best way to support this blog is to buy one of my books. Simply go over to Amazon, or Kobo and get one.
Labels: 2000 AD British Comic Book Comic Books Prog Slog