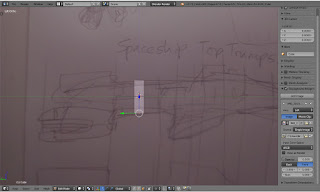 It's a while since I did much using Blender, and I miss it. Blender is just so much fun to use that it is almost like gaming, like a game such as Minecraft, where creativity is an important aspect. I love spaceships, and I'm creating yet another one, this one called Vagabond, a name generated by a name generator site.
I sketched out a spaceship, which I don't usually bother doing, as a guide for the initial stages of constructing the model. I then had to google the way to import the sketch as a guide. I found the instructions here, and it's as easy as pie.
If you look carefully at the screenshot, you can see that I am toying with the idea of creating a 30-card set of Top Trump-type cards. 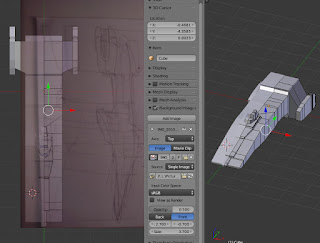 After following the contours of the side elevation it is time to move on to the top elevation. Right now the spaceship looks like a flying brick, and it should be a graceful dart shape instead.

The process does not produce a perfectly modeled spaceship mesh. After adjusting the side elevation and the top elevation, the spaceship looks good from above and from the side, but any other view reveals the spaceship to still be very blocky indeed.

I'm ready to do the first render, a very simple one with a single camera and a single light source. This will be the misshapen "before" picture that will make the final rener of the spaceship look even better when the last "after" picture is generated. 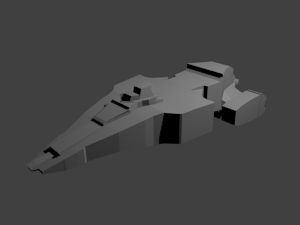 The background is neutral grey, as is the spaceship model, which makes the mesh tricky to pick out. I'll replace the grey background with a starscape as the first order of business.

Once I get it nicely silhouetted against a starscape, I'll move on to adding smooth areas and greebles, then colouring and lighting the model.

I found some great greebles at this website, advertising something called Filter Forge. The texture they are displaying on the page is very nice and I want to add something similar to my model. Filter Forge is for Photoshop, and I use GIMP, so I'll have to go looking to see if there is something similar in the GIMP universe. 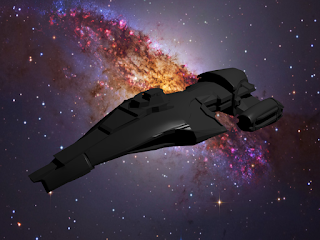 The model is certainly looking smooth now, but to give it scale, it'll look better with rough, greebled areas as well.

The smooth areas will be a mixture of blue armour, or perhaps red, and bare grey metal. The rough areas will be slightly darker metal, a little oily perhaps, with deeper shadows.

The model isn't quite finished ye, but I've spent a few hours on it, so it's time to knock it on the head for today. When the whole thing is done, it'll be used in a role-playing game supplement, such as this planetary exploration vehicle for sci-fi RPGs. Like all the RPG products I create, it's available from RPGDriveThru. 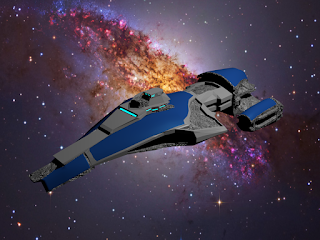