A Spaceship called Vagabond on some Merch 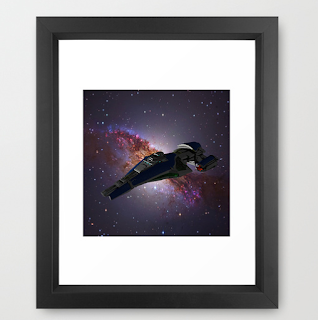 I've uploaded some renders of my latest spaceship to Society 6, where they put the images on merch. Among the options, such as phone cases, is the relatively classy option of selling the image as an art print.

I've become much more convinced that 3D renders can be considered to be art, with serious pieces like this, even though genre pieces such as sci-fi are unfairly ignored by the "proper" art world.

This prejudice against science fiction themes isn't confined to the art world, of course. There has never been a Booker prize winner with a sci-fi theme, for example.

There is a school of thought that says real literature can't contain spaceships, aliens or dragons. Science fiction and fantasy has always been dismissed as mere escapism.

Ursula K. Le Guin has said, on Gerry Canavan, that she is mostly dismissed as a “sci fi writer.”

When Margaret Atwood writes a serious review of one of my books for the New York Times, it is printed under the title “The Queen of Quinkdom,” to make sure nobody takes it seriously. I am shortlisted for major awards, but the awards go to people like De Lillo and MacCarthy who also write science fiction, using the tropes and loci and metaphors of science fiction, but fastidiously keep their literary skirts from being defiled by the name of genre.

Ed Finn at the Huffington Post asks what science fiction is good for, but also notes that things are changing. The New Yorker, for example has started to publish science fiction. And if sci-fi can start to be taken seriously in the literary world, perhaps it will, eventually be able to encroach on the art world. And perhaps it is, with artists finding "inspiration" in sci-fi paintings, as this BBC news story about an artists ripping off a classic sci-fi image shows.
Labels: 3D mesh model Society 6 Traveller. Spaceship