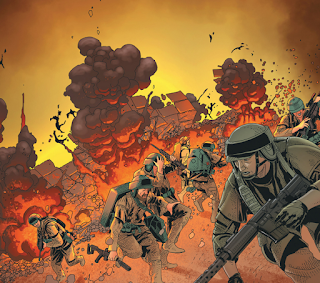 Comic Vine has a cool feature that they call Best Battles, and it is a fun read. You get a roundup of all the punch ups that the costumed superheroes of the Marvel, DC and other stables have been involved in.
The battles give you a real insight into the comic, before you decide whether to get hold of it or not. This week, for example, they talk about Vader Down, a comic revolving around everyone's favorite Sith Lord.
In the comic Vader massacres hundreds of rebels with a wiggle of his little finger. It's all a long way from the original movies, where Vader felt it necessary to send in a squad if storm troopers to capture a princess from a diplomatic yacht, in the first scene of the first film.
I prefer this, less powerful, idea of the Jedi, where they are not unstoppable badasses.
The feature also features a battle from the pages of Teenage Mutant Ninja Turtles, just to remind us not to take all these comic book fights so seriously.
Another battle this week features Wolverine. I've never been a big fan of Wolverine. His powers (actually her powers in the present incarnation) can't really be used to subdue opponents. Her power is to have really sharp knives pop out of her hands, which she then uses to turn opponents into the mess you see after a long game of fruit ninja. I'm not sure about this present incarnation but when Logan was Wolverine he had a regeneration factor that brought him back to life after injuries, even fatal ones. The character turned into an unstoppable killing machine power fantasy. To me, this all sounds like the character is a bad guy, not a good guy.
All the mayhem always makes this feature an interesting read each week, even if you wouldn't necessarily want to go get such bloodthirsty comic books. And, of course, comic books that don't feature two-fisted justice so much, such as Doctor Strange, one of my current favorites, are rarely seen here. Luckily, for that, Comic Vine has another feature - Best Other Stuff, where fans of less violent comics can see their favorite reads represented.
Labels: Comic Books DC Marvel