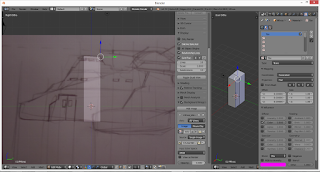 I'm starting a new spaceship model, and the first step is to do some sketching, with a good old fashioned sheet of paper and a pencil. Then I should probably scan the sketch into the computer, but it's easier to just take a photo and drag and drop the jpeg from the camera phone.

This spaceship is going to be a small fast attack craft type of spaceship, so I'll have to keep the number of windows to a minimum and leave only a little space for interior areas.

With that in mind, I load my jpeg of the sketch into Blender and start to create 3D shapes in rough agreement with the sketch. Using this method, I can have a spaceship shape to start detailed modelling with quite quickly.

The initial sketch has only the largest features, such as the bridge, and coarsest detail, such as an airlock positioned near the nose. Then I build up the side elevation, then flip the spaceship onto its belly and do the same to block in the basic shapes of the top elevation.

Then I spin the model until it can be seen from an isometric viewpoint and try to marry the two views to create a pleasing model. The model looked a bit blocky so I also squished it to make it lower and stretched it to make it longer, creating a much sleeker shape. Then it was time for the first render. There has been a lot of progress, but the render is still very basic compared to what I hope the finished spaceship is going to look like. 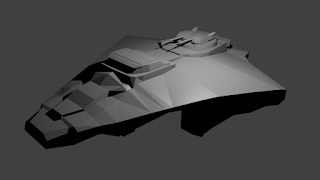 Despite the basic render, some things can already been seen. The model has the wedge shape typical of a Traveller spaceship, where this shape is one of the default configurations.

I've given the spaceship a single turret with just two guns in it, but if I create the profile using Mongoose Traveller rules, it should, I think, perhaps have a few more. I'll just have to create a small spaceship and try and choose a hull with the minimum number of hardpoints for turrets. I'm just going to try and ignore the stats and make a nice shaped spaceship. Then I'll somehow fit the stats to the model.