Daredevil is back in NY 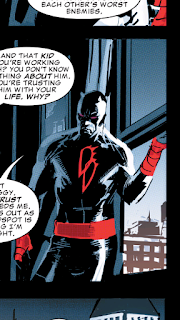 As usual when I'm talking about the comic books I've read, I just can't help throwing in a bunch of spoilers.
I just saw this review of the new Dare Devil on Comic Vine, and I had to get my hands on the comic. I haven't read a Daredevil comic book since the days when Frank Miller was writing them, before he went crazy. Apparently, in the mean time, Matt Murdock, the Daredevil secret identity, went away to San Francisco and now he is back in NY. Matt is now working with the District Attorney's Office, and has a sidekick.

These are all big changes to the Daredevil I'm used to, the heroic Daredevil that defended his clients, rather than trying to put the bad guys away, and I'm giving this the benefit of the doubt for now. It allowed Matt to deliver a great soliloquy about how a thug had no choice but to roll over on his boss, and his new office in an elevator shaft is a superb visual. The story is good enough, but it will be the art that keeps me coming back for more.
The first thing I noticed about the comic book is the art. It's detailed, atmospheric, skillfully drawn and cinematic, in a word: superb. The artist Ron Garney has filled the New York of Daredevil with shadows, and I'm not the only one who sees the influence of the aforementioned Frank Miller in the visuals. The writer says he sees it too, in this interview. The difference is that Frank Miller was great at creating mood with shadow, but wasn't so hot at actually drawing. Ron Garney, here in this book, is managing to do both.

I'm not a hundred percent sold on the new costume though, I mean he's a devil and devils are red. But this isn't daredevils first iffy costume, as you can see in this brief list. He's had quite a few questionable fashion choices going on over the years.

In the spirit of full disclosure, this is an affiliate link, which means that I may get a commissions if you decide to purchase anything from Amazon. I only recommend comic books that I have read and enjoyed.
Labels: Comic Books Daredevil Marvel