Devil Dinosaur is back 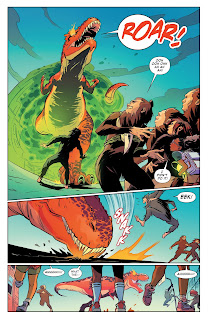 I just read the first issue of the relaunched Devil Dinosaur and, as usual, this post is gonna be chock full of spoilers. I’ll start by noting that none of the prehistoric people in the image above, of a rampaging red dinosaur in New York, is Moon Boy. He’s been unceremoniously dumped, and might even be dead. I’m a little sad about that. I would have enjoyed seeing some interaction between the old Moon Boy and the new Moon Girl before he was, more gently perhaps, written out.

He’s still breathing in the last panel he appears in though, so he could return later, and our new heroin is smart enough to be able to decode his language and talk with him. Without Moon Boy, the new human character will have more room to establish her personality, and that is a good thing.

I love the new heroin. She is a misfit at school because she’s too brainy to relate to the other kids, and what comicbook-reading nerd — I count myself among that number, by the way — can’t relate to that. There is a lot of potential mileage in the story, even without a giant red dinosaur, just based on the compelling central character. But what about the art, hugely important in a comic book that is presenting a dinosaur in New York. Short answer, not too bad.

I like the new look for Devil Dinosaur. He conforms much more to what we know about actual dinosaur physiognomy, if that’s the word, than the old Kirby version did, without going the whole hog and being entirely the epitome of cutting-edge science. There is a consensus starting to build, I think, that dinosaurs like t-rex had an, at least, partial covering of feathers or protofeathers, perhaps as a shaggy coat down their back.

I’d have been sad to see Devil Dino covered in feathers like a giant chicken. He’s still a scaly monster and that’s how he should stay.

The art in the new comic is great in other ways too. It has the same level of detail as the original Kirby art, but with a more modern sensibility. It has the same energy too, with dramatic camera angles and poses in the action panels.

According to Wikipedia, The original Devil Dinosaur series chronicled Devil and Moon-Boy’s adventures in their home, "Dinosaur World". We get a glimpse of this world in the new comic, but then Devil Dinosaur is unceremoniously wrenched from prehistory and deposited in modern-day New York. I can’t wait to see how the comic book deals with a dino on the loose in the big city, or are they gonna whistle Moon Girl away to the dawn of time? It should be an interesting ride.

I loved this comic, can’t wait for more.


In the spirit of full disclosure, this is an affiliate link, which means that I may get a commissions if you decide to purchase anything from Amazon. I only recommend comic books that I have read and enjoyed.
Labels: Comic Books Devil Dinosaur Marvel