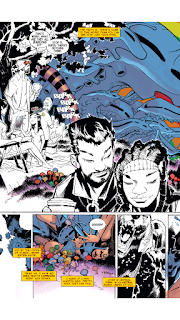 As usual, there are spoilers ahead with this comic book review.
I've been a fan of Doctor Strange even since I read a supplement for the Marvel Superheros RPG that added magic to the basic rules, called Realms of Magic. This RPG supplement based on the Doctor Strange comics was my gateway drug into the original comic books themselves. Over the years, Doctor Strange has been of variable quality at best, spending a lot of time running around with a big green minotaur with no pants on, for example, but this latest relaunch is, at least so far, really quite good.
I'm up to issue three of the relaunch now, and it was enjoyable, though there wasn't a whole lot going on. The idea is that there is a big bad coming for the good doctor, which we already knew last issue. This issue just showed some of the big bad's evil ways.
I think it has to count as filler, and while I was reading my way through this filler I started to thing about Dr. Stranger's manservant. He is a kind of butler, like Batman's servant Alfred, only Asian.
In the middle of battling to save the Doctor's property, a mansion where the servant lives, he apologizes because dinner is going to be late. He also asks a lot of dumb questions and strays dangerously into Cato, the imbecile manservant from the Pink Panther movies, territory. It's not just me, Vulture thinks Wong is racist too, saying,

Wong comes from a long line of Chinese monks and was sent by the Ancient One to serve Strange. It's a really racist origin story, though modern writers have found ways to make him interesting. Hopefully the movie will figure out a way to make him less offensive (if they include him at all).

This issue is trying to be lighthearted, with the doctor being stripped naked and a lot of barfing, but the writers should, I think, be careful about the Wong character. He could probably be retired and replaced with some magical servant without hurting the storytelling in any way.
The art was, as usual, lovely. Magic is depicted as a fun, LSD-type experience with giant mushrooms and strange shaped, hallucinogenic creatures, while a world without magic is a bleak winter landscape. It is very effective idea, and the new bad guy, from what we have seen, isn't just another conjurer in a cape or devil, but has some kind of high-tech, cybernetics based powers. It'll be interesting to see how Stephen Strange deals with him in the upcoming episodes.


In the spirit of full disclosure, this is an affiliate link, which means that I may get a commissions if you decide to purchase anything from Amazon. I only recommend comic books that I have read and enjoyed.
Labels: Comic Books Marvel