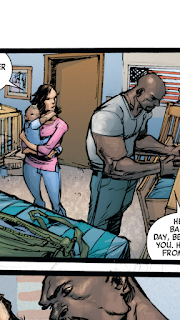 As usual, when I'm talking about comic books there are going to be spoilers.
I have never read either a Jessica Jones or Luke Cage comic book before and, obviously, I'm only getting round to it now because of the new Netflix show. Like thousands of other viewers who have had a good experience watching the show. I watched and enjoyed the Jessica Jones show, and the Luke Cage character was one of the best things about it. I found myself unable to wait for the Luke Cage show to come out, sometime in 2016. I decided I had to find the original comic book, in some form or other, and get myself another hit of Jones and Cage.
Three or four pages into the Luke Cage comic book I found to read and I was already in a state of shock. Luke and Jessica are together, and they have a baby. From the relationship they have in the show it isn't totally unexpected, but it still took my surprise a little bit.
In this comic book, the two of them are acting like an old, married couple round each other, and that's adorable, but very different from the TV shows. They don't get many panels together unfortunately, and Luke is soon off on the road for a solo adventure.
Before the action gets going, the comic quickly tells us about how Cage used to be Power Man, and how he was based in Harlem. Then there is a big fight with a character called Hammerhead, and some set up of the big bad, a hint that things aren't as simple as they first seem and that's it, the comic book is over. It's a very efficient piece of writing work.
The art is nice too, transitioning nicely from more realistic scenes of ordinary life to more exaggerated scenes of superpowered individuals smacking each other around. The line work is complex, with scratchy hatching in the shadows and the colors are subdued. It gives the comic atmosphere without being too Noir.
I'll be returning to this story to see what the bad guys are up to and what the big bad can do. The comic is a limited series so, unlike with an ongoing title, I'm hopeful that all the loose ends will tie up nicely to make a satisfying little story. So, off I go to get issue two.
Labels: Comic Books jessica jones Marvel netflix