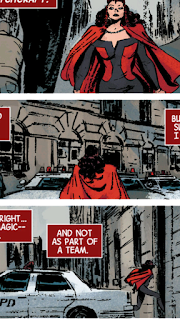 As usual, there are spoilers contained in my ramblings below, which are a collection of thoughts after reading issue 1 of the Scarlet Witch.
I don't know much about Scarlet Witch, apart from her iconic look, so I didn't know what to expect from this comic book.
Scarlet Witch started out as a mutant, originally the daughter of the Golden Age superhero Whizzer, a retcon later established she and her twin brother Quicksilver were the children of Magneto. A new retcon makes her a non-mutant, kidnapped and experimented on by the High Evolutionary, and then misled to believe that Magneto was her father, so the usual complex comic-book character backstory. Luckily the first issue of this new book doesn't feel the necessity of explaining any of this. The story is simple and the art is beautiful.
The art isn't just attractive, it also sets a mood. This book has art so murky it looks like it was done with charcoal by a graduate from a fine art school who never even looked at How to Draw Comics the Marvel Way, and I love it. It fits perfectly for this vision  of New York and this vision of Scarlet Witch. The colours are particularly atmospheric, done by a different artist to the linework, in the strange system that US comics have for producing their art.
Another plus point is that Scarlet Witch is not drawn in the usual, unobtainable body image, way of female Marvel characters, and that also adds to the book's sophisticated look, as does the sophisticated version of her costume where her superhero cape has been shrunken down to a pretty little fashion cape. Her previous costume was just a bathing suit and boots.
The art ditches the sexism of the past and in the story too she deals with some casual sexism. A fat old Neanderthal cop calls her "sweetheart" and she replies by calling him "buttercup", which made me smile.
One word of warning, the Comic Vine review of this book wasn't glowing. They said the comic would "play fine" for new readers but was too dry for readers more familiar with the character.
I'm a new reader so perhaps the praise I'm giving the book would be less if I had more insight into who Scarlet Witch was before. For example, I'm not sure who the ghost is that turns up half way through, but I'm looking forward to finding out. A reader with more insight into the character might not find such touches so intriguing. But, as I said, I loved the book.

In the spirit of full disclosure, this is an affiliate link, which means that I may get a commissions if you decide to purchase anything from Amazon. I only recommend comic books that I have read and enjoyed.
Labels: Comic Books Marvel