Silk - a new kind of Spiderwoman 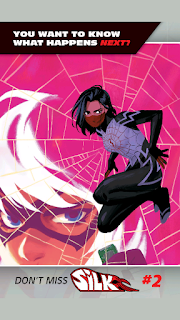 I'm talking about Silk, issue 1, and there are spoilers ahead.
I've started reading Silk, after never reading the character before, just because I like all things Spider. It's not a stand out comic yet, but the first issue was nicely done.
Starting with the things I like; her editor won't believe she is a supervillain, which is a nice twist on Spiderman's editor who won't believe he is a hero. I also like that she has a handler, a SHIELD agent who gives her missions and has a 'hold' over her.
For me, however, the prime concern is art. A comic book lives or dies based on its art and I can read terrible rubbish if the art is good, while, on the other side if the coin, a comic book has to have something really special about it if I'm going to ignore art that doesn't appeal to me.
Silk has art that fits her teenage vibe, without being too gimmicky or young for the sake of it. It's skillfully drawn, and, apart from a few closeup's of the female characters' behinds is free of the pouty, cheesecake sexism that can plague comic books, and always has plagued them.
I admit I'm liking it. The Goblin King bad guy isn't sending shivers of fear down my spine yet, but I'm interested to see how he fits in with the plot about Silk's brother, who ended up in the goblin gang, and SHIELD who are dolling out information about the whole thing to Silk to keep her on mission.
I was wondering what more knowledgeable readers might have picked up from the issue so I checked out this review at Comic Book Resources and it was almost like he reviewer was reading a different comic. The reviewer explained that some of the scenes were flashbacks, which I didn't realize, and that she returned to her bunker at the end of the comic book. Again, that little detail completely passed me by. Reading the review was almost as interesting as reading the comic itself. There were some things I disagreed with the reviewer about, for example where he criticizes the heroine's long hair as impractical. Nobody ever makes comments like that about Batman's cape. And in the comic, her hair isn't that long. I'm really starting to suspect this is the second time this character has been launched with a comic numbered #1.
Anyway, I'll be reading issue two as soon as I get hold of it, but that's as likely as not because it is a quick and unchallenging read that puts a smile on my face, but that's no bad thing in a comic book.

In the spirit of full disclosure, this is an affiliate link, which means that I may get a commissions if you decide to purchase anything from Amazon. I only recommend comic books that I have read and enjoyed.
Labels: Marvel Silk