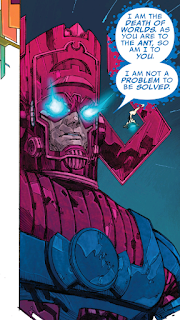 As usual, when I'm talking about comic books, watch out for spoilers.
I'm a big fan of sci-fi and my favorite comic books always have a heavy mix of sci-fi in the recipe, and a new book I've started reading has a nice healthy dose of this. This new book is called The Ultimates, and, so far, is really apealing to this side of me. The comic book is happening primarily in outer space and consists of more than just fights and talking racoons. There are ideas here, and characters who primarily use their minds to solve problems. That said, it's still just a comic book and most things can be fixed if you just blast more energy at them.
In a lovely conceit, the second episode of the Ultimates starts with Blue Marvel video blogging. Of course he is a superhero/genius so his blog is available to everyone on the planet in every language, unlike the usual makeup tutorials and cat videos that populate Facebook. It's a natural and easy way to catch everyone up on what happened previously in the comic book and works surprisingly well. Then a whole lot happens at lightning speed, with a huge change to Galactus coming at the end. It's a wild ride, and there's more to come.
The events in this book are absolutely cosmic for the Marvel universe, which means they'll probably be retconned away pretty soon, making the whole thing little more than a what-if-type thought experiment. But while it's all happening it looks like it'll be an interesting time. The Ultimates have actually turned Galactus - if the end panel is an indication - from a destroyer of worlds to a healer of worlds.
A story like this needs art that picks out every greeble on the surface of the intergalactic machines used to create such superscience effects. Without art that instills a touch of awe the whole thing could get pretty silly pretty quickly. Luckily this book has an artist that can render Galactus healing a planet in a single panel and have it all look good and make sense. Highly recommended.
In the spirit of full disclosure, this is an affiliate link, which means that I may get a commissions if you decide to purchase anything from Amazon. I only recommend comic books that I have read and enjoyed.
Labels: Comic Books Marvel