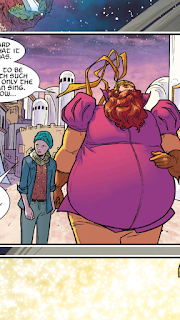 I'm talking about a comic book I just read, so this is chock full of spoilers and such like.
The comic book I'm reading is the new Thor, and, unfortunately, it's dumb. There are a lot of things that I do like about it, such as the way Fox News is parodied and made pretty much the main bad guy of the issue, and the new Thor's costume, which is a superhero costume but with a lot of the original costume still to be seen, but the bad outweighs the good.
There just too many things that I didn't like. The new Thor spends a lot of the time in her cancer-ravaged secret identity, and wanders round with a huge blimp of character in a purple coat. She is about 20% the size of him and drawn in an austere and realistic style. His anatomy bears no relation to reality, and he has strange ribbons coming out the top of his head, floating like he is in zero G. For me, it doesn't work. The two characters just don't look like they inhabit the same universe. In fact, almost every character from Thor's home realm has a different look. Heimdal looks pretty much the same as in the movie. Loki has updated his look and resembles an actor from a daytime soap opera.Odin's wife has a ridiculous cyberpunk hairdo. Nothing has a consistent feel to it, which makes it hard to accept these more magical aspects of the Thor character.
A lot of the action doesn't work either. We spend a lot of time watching goblins and gnomes pay politics on floating frisbees, and when there is action, it's silly. There is a scene where Thor stops a plummeting space station from hitting the ground by getting her fingertips on a metal panel on its corner. When she yanks at it, instead of that one panel coming off, the while space station moves. It would be like lifting up your house by the corner. The sort of stupid stuff that only happens if you apply the laws of physics found in cartoons.Then an astronaut gets out, after falling from orbit, and the guy's only injury is he's a bit woozy and has a broken clavicle. I know comic books are supposed to be fun, but that's just dumb.
I must admit that, despite its flaws, I read all the way to the end and will probably be reading issue #2, so perhaps it wasn't all that bad after all.

In the spirit of full disclosure, this is an affiliate link, which means that I may get a commissions if you decide to purchase anything from Amazon. I only recommend comic books that I have read and enjoyed.
Labels: Comic Books Marvel