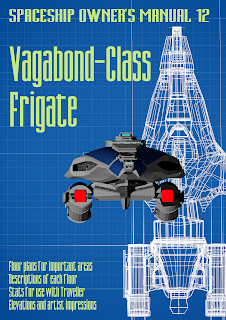 I've continued work on the Vagabond, and the more work I do on the model, the more ambitious I am about what I can create for the RPG supplement.

To get an idea of the sort of thing to be found in a spaceship supplement for RPGs, just take a look at some of the other supplements I have created, over at RPGDriveThru. One of my favorites is the Ironclad, a mobile, jail, police station, combat spaceship.

It's tempting, when putting a supplement like this together, to create floor plans for every inch of the interior space of the starship, which the Ironclad, for example, includes. But this time I'm toying with the idea of creating more detailed plans for just a few areas of the spaceship.

This would treat the spaceship more like a movie location. There would be "sets" for the most important locations, such as bridge, corridor, cabin, elevator, engineering, etc, but the details of how this fit together would be a little vague.

My reasoning for this is that spaceships aren't dungeons, like in Dungeons and Dragons, and so it doesn't make sense to crawl along every foot of corridor and boot down every door, like you would if you were clearing a dungeon of monsters and treasure. Anyway, the product will be released soon and you will be able to judge for yourself how successful the new approach has been.
Labels: 3D mesh model RPG Traveller. Spaceship