Work on the Interior of the Latest Spaceship - the Milvus 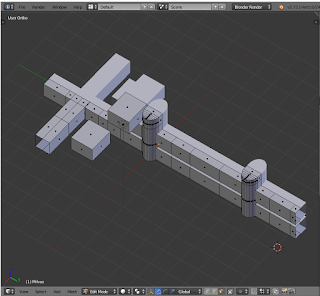 I'm doing the interior of the spaceship at the same time as the exterior, to make sure the interior areas will fit within the hull. So far I only have two rooms, a couple of corridors and two lift shafts, but there will soon be a lot more.

I'm basing the interior areas on the deck plans of the Sentinel Class Fast Response Cutter that I found on the internet.

It seems to have quite a large number of toilets, based on what I can see in the deck plans, so I'll probably adapt them quite a bit for a sci-fi fast attack spaceship.

I first began work on the lowest and largest deck, to see how many rooms I could comfortably fit within the skin of the spaceship and leave plenty of room for other systems, such as an engine, water tanks, and life support. 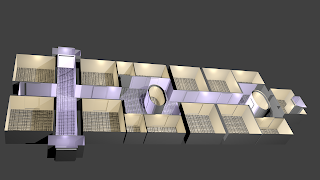 You can still see the central corridor I started with, but you can also see that there are now a few rooms arrayed along the corridor. I've put a few lamps in the rooms, with warm yellow light, and some cooler, more blue lights in the corridor.

I'm very tempted to start a little interior design. The rooms on this floor are most likely cabins for the crew, so they'll need beds and wash basins inside.

There are also three airlocks at the end of the corridors, where the mesh for the lowest deck will intersect with the mesh of the hull. And a last render of the interior spaces shown within the hull of the spaceship. 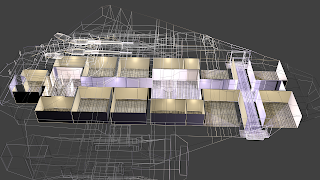