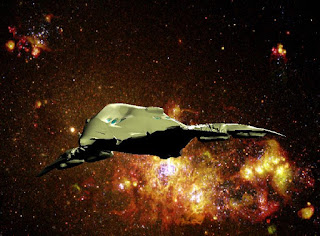 I'm posting chapter two to Iron Dart today. So I need to add an image to the chapter, not sure why, but it's pretty so why not.

Iron Dart is part two of my series of science-fiction novels. (Read each chapter as it is completed here, at Wattpad). The first novel in the series is Galaxy Dog. (Get it here at Smashwords).

In this chapter we see what has happened to the main characters from Galaxy Dog, after blasting their way out of a trap set by the Tarazet Space Navy.

It's interesting to try and explore what such an extreme act, something most people would consider high treason, has on the characters. After a couple of chapters introducing new characters and catching up with old characters it is probably time to get to some action in chapter three.

I'll bring the focus to the monsters from book one, and a big fight between them and the Tarazet Navy. This is going to be a slice of Military Sci-Fi after all.
Labels: Iron Dart military Sci-Fi Novel Self-Published Spaceship