Spaceship Render for a Book Cover 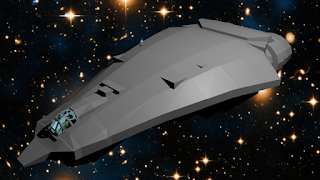 I'm creating a spaceship for the cover of Iron Dart which fits better with the actual description of the spaceship. Iron Dart is part two of my series of science-fiction novels. The first novel in the series is Galaxy Dog. (Get it here at Smashwords).

In the book, the spaceship is described as follows:-

The Iron Dart was just an old wedge-shaped heavy shuttle, reconfigured many years ago for use by a prospector, then reconfigured again by Kaden, more years ago than he wanted to remember, with the addition of a cell to cart his captured marks off to incarceration. The hull was mostly bare metal, pockmarked with small craters, evidence of the trouble his underpowered shields had keeping the Iron Dart from being damaged by some of the larger crumbs of rock and debris floating around in interstellar space.
There were systems welded, bolted and bonded all over the hull, adding to the chaotic appearance. Every time the galactic patrol mandated some new sensor system or signaling system as a minimum requirement, it had been bolted onto the ancient hull, without any of its long line of owners feeling the need to remove a system just because it had been made obsolete. Everything was improvised, everywhere there were panels missing, all the systems badly maintained, covered in carbon scoring and micrometeorite pockmarks.
The Iron Dart didn't even have a bridge, just a cockpit protruding forward, spoiling the lines of its wedge shaped configuration. It only had two cabins, if you didn't count the cell as a cabin, and that was about it. An airlock, a single weapons turret, not much more. Just an old a rust bucket, the smallest cheapest thing he could find with any kind of faster than light capabilities.
So the model I have at the moment already has the wedge shape, and it has a projecting cockpit, just like in the description in the book. It is still way too smooth and clean at the moment, of course, so as I write the book, I'll also be working on the spaceship for the cover.
Labels: 3D Blender Iron Dart military Sci-Fi model Novel Self-Published Spaceship