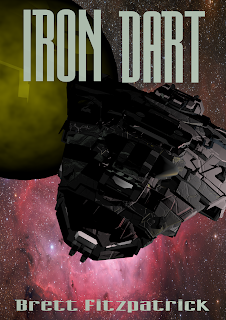 I've started work on part two of my series of science-fiction novels. (Read each chapter as it is completed here, at Wattpad). The first novel in the series is Galaxy Dog. (Get it here at Smashwords). While writing the text, I've also started work on a cover. As usual I'm creating the spaceship using Blender. In fact the entire cover image can be created in blender, including background and text. It's a truly great piece of software, completely free, and fun just to tinker around with, even if you don't have a clear idea of what you want to achieve with it.
It is very early days for the cover render, but it should give some idea of the way the book will eventually look. I wouldn't usually share the cover at such an early stage of development, but I need to post the image somewhere so that I can use it with Wattpad.
Wattpad is a writing community in which users are able to post articles, stories, fan fiction, and poems, either through the website or the mobile app. This gives people the chance to have their creative works available to a wider audience. The content includes work by undiscovered writers, published writers, new writers, with all users being given an equal chance to write popular works. Users are able to comment and like stories or join groups associated with the website.
I'm going to publish Iron Dart, the sequel to Galaxy Dog, one chapter at a time (as soon as I have each one written) on the Wattpad site.
Labels: 3D Blender mesh Self-Published Spaceship