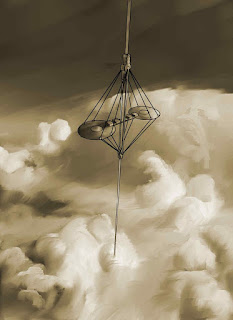 For my next 3D Blender project I've decided to create a space elevator, or, more specifically, the climber section of a space elevator. I'll most likely release it in the usual format that I use for the spaceships I make for role-playing games, the Spaceship Owner's Manual.

I'm no expert on space elevators and, even though I'm not going to bother too much about creating a "hard sci-fi" elevator, I would like it not to be a complete flight of fantasy. So I'll have to start with some research, and that, of course, means Wikipedia.

Wikipedia says that a space elevator allows vehicles to travel along the cable from a planetary surface directly into space, without large rockets. It consists of a cable with one end attached to the planet's surface near the equator and the other end in space beyond geostationary orbit. The competing forces of gravity and centrifugal force puts the cable under tension and holds it up, stationary over a single position on the surface of the planet. Climbers repeatedly ascend the tether to space by mechanical means, releasing their cargo to orbit. Climbers then descend the tether to return cargo to the surface from orbit.

Space elevators are especially good for planets with weaker gravity than Earth's, such as the Moon or Mars. Currently available materials such as Kevlar are strong and light enough that they could be used as the tether material for elevators there.

At 300 km/h it takes five days to climb to geosynchronous orbit. This makes the climber a great location for a self-contained adventure in a sci-fi role-playing game. Wireless energy transfer such as laser power beaming is currently considered the most likely method of powering a climber, but including a second cable and using the conductivity of carbon nanotubes to provide power is another option.

Wikipedia is fascinating about space elevators and so is The Spaceward Foundation, where I found out that the tether is likely to be a thin ribbon and it's a good idea to have a 100 miles no-fly zone around the base of the space elevator. Manned climbers will have the ability to soft-land. Space elevators have a very low cost per pound, meaning they will be roomy, and will have dining and sleeping accommodations. Large space elevators lift 1000 tons at a time, or about twenty cargo containers. The passenger versions can therefore be basically a mobile hotel.


With a bunch of research done, I can fire up Blender and actually start creating a model.

Permission granted for the use of the image by Liftport.
Labels: 3D Blender mesh RPG