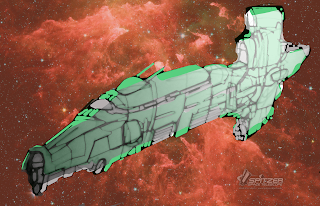 I'm starting a new 3D spaceship project - I like to have one on the go at most times - and I'm going for something sleek and fish-like in shape this time.

The picture with this post is a quick sketch, done with GIMP, to give me something to aim at when I pop open Blender and get going.

For once, I'm going to avoid putting any kind of wing on the spaceship, because spaceships don't really need wings, and they sort of make them look like airplanes.

The idea behind this design is a mobile base for a bad guy. The spaceship is medium size, with at least two decks and there are two docking bays in the belly. It's fast with big engines at the back, and will be useful in role-playing games as a place for a team of adventurers to disable and board.

There would be any number of rescue missions, or get back the McGuffin scenarios that would work very well with a spaceship like this as the target. Once the spaceship is complete, it will be released, with deck plans as supplement for sci-fi role-playing games, as part of a growing series that I sell through RPGDriveThru. One of the popular spaceship supplements I have already published - a silver seler, no less - is The Iron Clad, a sci-fi law-enforcement gunboat, another useful addition to any sci-fi RPG. Take a look at RPGDriveThru.
Labels: 3D GIMP military Sci-Fi RPG Sci-Fi Self-Published Spaceship