New Spaceship Mesh for the Starspray 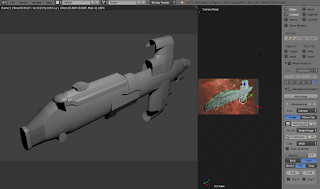 The new spaceship I started work on yesterday is now taking shape, literally. I've imported the 2D sketch I did into Blender, and now I'm creating a 3D shape, called a mesh, based on that sketch.

The picture to the left is a screen capture of the Blender interface. There are three windows open inside Blender. The window in the middle is the original sketch, and the window on the left is the 3D model I've started sculpting based on it.

The third window, the grey strip down the right-hand side with all the buttons and dials isn't used much during the modelling stage of building a 3D spaceship, but I like to have it open because I'm used to it being there and I would miss it if I closed it.

All those buttons and dials become very important later as I add colours, textures and lights to the model to make it look "real", or at least as real as a bunch of pixels pretending to be a spaceship can look.

For anyone who doesn't know Blender and has never tried it, you should download it and have some fun, because Blender is free and enormously powerful. People say it has a learning curve, but doesn't everything. Even before you know what all the settings do, you can have a lot of fun following one of the bazillions of tutorials on the Internet.

Once the spaceship is complete, it will be released with deck plans as a supplement for sci-fi role-playing games, as part of a growing series that I sell through RPGDriveThru. One of the popular spaceship supplements I have already published - a silver seller, no less - is The Ironclad, a sci-fi law-enforcement gunboat, another useful addition to any sci-fi RPG. Take a look at RPGDriveThru.
Labels: 3D Blender mesh model Spaceship