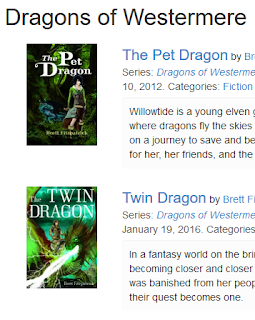 I'm still reading through book one of my Dragons of Westermere trilogy, (The Pet Dragon) and I will then be going on to read the second book (The Twi Dragon) before starting to write book three. The provisional title of third book is City of Dragons.

I wrote this book back in 2012, and it is quite surprising to me, both how much I remember and, how much I have forgotten. There are a couple of scenes, for example, where I am worried a few scenes don't quite work continuity-wise.

They are just small things, and I may even be imagining them, but, if I am right, and, for example, if one character claims not to know a character she was introduced to in book one - and this is a character she is not likely to forget - should I go back and fix it, or should I claim that this character is hiding the truth in the later scene.

It's quite a worry, and it is the main reason I am reading both books again, word by word, before starting on book three. I want to keep little hiccups of continuity like this to an absolute minimum.

This also got me thinking about whether I am just some kind of feeble-minded nincompoop or, perhaps, other writers had encountered similar problems. This is a fantasy story, so I immediately wondered if the giant of the field, Tolkien himself, had had any similar issues, and it turns out there are continuity problems in the Lord of the Rings.

Just a selection of the mixups from TLOR include Aragorn telling the hobbits, as they prepare to leave Bree, "After Weathertop our journey will become more difficult, and we shall have to choose between various dangers." But they encounter no dangers on the route.

Aragorn also tells the hobbits in Bree, "I know all the lands between the Shire and the Misty Mountains, for I have wandered over them for many years." But later, speaking of the Ettendales, he says, "That is troll-country, and little known to me," and "I do not know the way."

In The Council of Elrond Gandalf says that the Nazgûl kept their Rings. However in most other references, it is mentioned that Sauron had taken them. The line represents Tolkien's earlier intention that the Nazgûl should still be wearing their Rings, but he later changed his mind and simply missed revising that sentence.

There are plenty more examples, and it makes me feel a lot better when I find a mistake here or there in my own little series of books.
Labels: Dragons of Westermere Fantasy Novel Self-Published