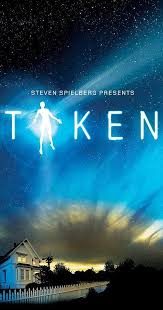 I've been at home on the computer doing some day job work for days on end lately and, to keep myself sane, I like to have a TV show on in the background while I'm working. I'll keep one ear on it, and glance over when, and if, things get interesting.

For this to work, of course, I need a bunch of TV to binge on, and I've already watched pretty much all the TV shows that I had the slightest interest in, or, at least, I thought I had.

It turns out there are still one or two interesting shows that I haven't got round to yet. I found a great list of sci-fi shows, many I'd never even heard of before at Sci Fi Freak.

On that list is a show called Taken, that I remember reading about but never seeing. It came out way back in 2002, and it must have been shown in the UK on some channel I didn't have, because I never saw it back then.

Taken is a science fiction miniseries spanning a period from 1944 to 2002 and following the lives of three families: the Crawfords, who seek to cover up the Roswell crash and the existence of aliens; the Keys, who are subject to frequent experimentation by the aliens; and the Clarkes, who shelter one of the surviving aliens from the crash.

I read a review that compared it to a soap opera, I suppose because of the miniseries following families format, but it was plenty sci-fi enough for me. I also like that, right from the start, you see the cover up through the eyes of the people who know the secret and through the eyes of people who don't. It's like the X-Files, but you actually get to find out what's going on.

I have a lot more work to do, and a lot more Taken to watch at the same time. Right now, I'm on episode two, and things are all still just starting to get going.