I'm writing my new book at the moment, but also designing the cover, so this Wall Street Journal article  was like catnip to me. I found it through Vox. I would not have otherwise found it, because I'm not somebody who normally spends any time reading the WSJ. Anyway, the gist of the article seems to be that a book cover should be very colorful, and that it should especially include yellow. 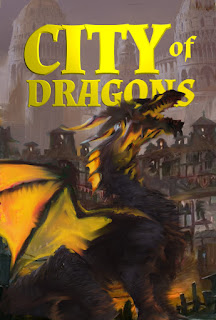 This made me happy because my cover prominently features a "good dragon" showing off its wings and arching its neck, and the creature's predominant color is yellow.

It's a dark, moody yellow, with a lot of the beast in silhouette, but it is yellow.

The idea that yellow is the best choice is based on the idea that, with online books - though the writer only really mentions Amazon, everything gets simplified to what you can see at a resolution of one inch across.

The theory of good cover design, according to the article at least, is that high contrast covers are most eye catching. Ideally white and black would be the best combination of high contrast elements but, because web pages usually have a white background, you need yellow to contrast with the black elements of the cover and to also contrast against the white page of the website.

To me that seems intuitive and believable, very different to be being proved through research, but believable. So, what the hay, my latest cover was going to be mostly yellow anyway, so why don't I up the yellow content a bit, intensify it, see what happens?

This advice was helpful to me because, unlike, I think, many self-publishers, my covers are produced entirely in-house. They aren't amateurish, I hope, because I use top notch software. I say"top notch" instead of professional because I don't use anything by Adobe. Their products are industry standard, which forces the poor drones employed in the industry or working freelancing for the industry to engage with them, but I'm out on my own. I can do what I like. Which means I can use great software that produces professionals looking credits, without paying a few thousand dollars for the privilege.

I use GIMP for digital painting, dragons and such, and Blender for virtually everything else. Blender, in particular, is great for creating space ships (for the covers of my sci-fi books) and for creating text with cool 3D effects.

GIMP and Blender both have a leaning curve and take months of practice before good things start to emerge, but, and this is a big but, the Internet is full of tutorials created by enthusiastic and creative amateurs to help you up that slope of a learning curve. This latest version of the cover for the book I'm currently writing has some 3D effects in the text, which I'll be working on further as I gradually take the image to the perfect cover I know will one day be.
Labels: 3D Blender City of Dragons Dragons of Westermere Fantasy GIMP Self-Published