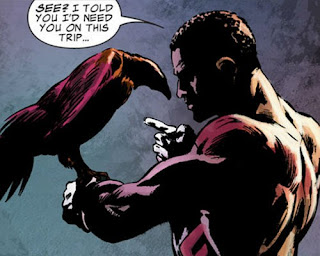 I just read an article about Drones in the Captain America: Civil War movie on the Mary Sue that got me thinking about robots and drones in sci-fi fiction. In the article it points out that Falcon's bird buddy, Redwing, has now been re-imagined as a drone. There is more detail about Redwing here at this blog, (komikstripped) and this blog is also where I got the illustration for this post.

The reason this story resonated with me is that the very first chapter of the very first sci-fi book I wrote* includes drones. Of course, it's difficult to imagine future war without robots and drones, but, if robots and drones are involved in combat, why do we need humans? As an author, I need humans in the middle of the action in order to tell a story, but I also need some sort of justification that works as part of the story.

What I came up with is that the humans are there to correct rare instances when the drones start doing stupid things. Anyone who has ever played a computer game where the console controls some of the opponents will be familiar with the weird stuff AI can get up to, such as these Halo AI Fails. My favorite is the grunt that manages to get itself caught between two trees. It's a small role for humans in future combat, but an important one, and I think it works in the context of the book.

*I had written a fantasy book before that is called The Pet Dragon, but Galaxy Dog was my first book with traditional sci-fi elements such as spaceships, FTL and robots.
Labels: Galaxy Dog military Sci-Fi Sci-Fi Self-Published Smashwords