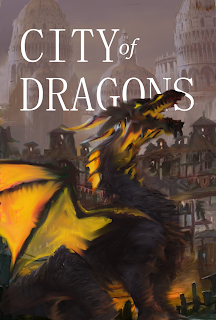 As I mentioned in my previous post, about twenty days ago now, I have started writing my latest fantasy book. It will be called the City of Dragons and it will be the third book in the Dragons of Westermere trilogy.

I have now reached three completed chapters and I have been working on the cover. (It is great to be doing both art and text myself simultaneously, because the art informs the writing while the writing informs the art). The cover is far, far, far from finished, but taking a step back now and again to gaze at it allows fresh inspiration to strike, if I'm lucky.

It is only now, upon seeing the cover reduced to a thumbnail for inclusion in a blog post, that I'm realizing it looks like the classic UK cover for the Shadow of the Torturer by Gene Wolfe.

Wikipedia says the following about The Shadow of the Torturer. It is a science fantasy novel by Gene Wolfe, published by Simon & Schuster in 1980. It is the first of four volumes in The Book of the New Sun which Wolfe had completed in draft before The Shadow of the Torturer was published. It relates the story of Severian, an apprentice Seeker for Truth and Penitence (the guild of torturers), from his youth through his expulsion from the guild and subsequent journey out of his home city of Nessus. In 1987, Locus magazine ranked The Shadow of the Torturer number four among the 33 All-Time Best Fantasy Novels.

It' been a long time since I read the book and Gene Wolfe is reputed to be a difficult author, so not much remained in my active memory, although it obviously still has a place in my subconscious. The events of the book take place among a dying landscape. Much of the first half of the novel takes place in a decrepit, dark city of medieval towers known as the Citadel.

The novel is written in a translation style, as if it is a translation of ancient manuscripts. Unlike the fantasy I'm writing, there are no grand events in the book, only small events that culminate in character growth. It's a book I haven't read for a very long time indeed, and it is a testament to the evocative power of art that it surfaced at all. It is all very atmospheric, but I'm not sure it is the text of the book that made such an impression on me in the 80s. I think it is the cover. 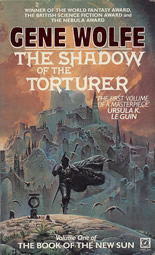 In the book cover, the colors of the background city are subdued and ashy, which is what I was going for in my first attempt to get a colour scheme for the cover of my upcoming novel.

I'm sure now, that it's definitely not the book itself that made such an impression, it is the art by Bruce Pennington. According to the introduction to this interview I found, Bruce’s work was a fixture of any bookshop with a good SF and Fantasy section in the 60s, 70s and 80s. His work could be seen on the covers for Ray Bradbury, Frank Herbert, Robert Heinlein, Marion Zimmer Bradley, and many more. And Gene himself considers Bruce’s cover for The Shadow of the Torturer to be one of his favorites. I can only agree, and these haunting city-scapes are sure to find a place in City of Dragons as I write it.