The Lexa Pledge for Better Stories 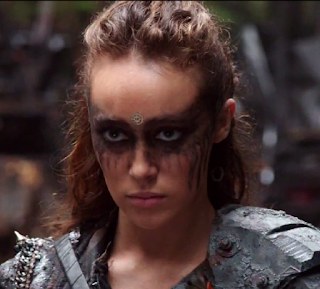 The Lexa Pledge is an expression of the sense of betrayal still felt at one plot line in a popular sci-fi show called The 100. A plot line so bad it is widely seen as one of the most egregious examples of the Bury Your Gays trope this year (among a crowded field of competitors).

As explained in this post on The Mary Sue, the plot line is as follows:

In its 3rd season The 100 had focused heavily on the evolving nature of the relationship between its lead character Clarke and recurring character Commander Lexa, and the gradual shift towards their relationship becoming romantic.

Towards the end of the 7th episode, Lexa and Clarke finally make the full shift from allies to lovers. Directly after (seriously, like the next scene) one of Lexa’s advisers tries to assassinate Clarke, but winds up accidentally shooting Lexa, killing her. And people were, understandably, pissed.

The huge response now includes an initiative called the Lexa Pledge, which is an idea from four women, including two writers of the Canadian TV show Saving Hope. The pledge includes the following provisions, among others.

Significant LGBTQ characters must have significant storylines with meaningful arcs.

A queer character must not be killed solely to further the plot of a straight one.

The Bury Your Gays trope is harmful, especially to queer youth and must not be perpetuated.

The pledge is geared towards TV writers, and it includes parts about having LGBT writers on staff, but it is also useful guidance for writers of novels. I'm certainly going to think about the Lexa Pledge as I write part three of my fantasy trilogy. I have numerous, significant female characters, thanks to already being very committed to the Bechdel Test. Now I just have to decide which two of these characters are going to be thrown together and fall in love, so I can take the pledge.

Hearing about this sort of stuff on the Internet is very useful to me because I would not otherwise be exposed to ideas like these, and I want to be exposed to them.

In my books, I am writing for the young sci-fi fan I was, and that boy was a heterosexual male, but that does not mean I should allow my ignorance of other gender identities, ethnic identifications, disability challenges, potential triggering life experiences or sexual preferences to mean I inadvertently create stories that are not inclusive. I feel I owe it to my readers to learn as much as I can about what makes a story offensive, and flat out avoid writing that stuff.

Of course, even as a member of the target audience of most genre stories, white, male, etc, I'm still not completely oblivious to toxic tropes in the media. Even in the days before the Internet, before I realized that James Bond films were not okay, there were things that bothered me, even if I didn't know why. I had very little experience of the world but, even so, some of the things I saw in movies and on TV didn't seem right.

I noticed that very often that the Black Dude Dies First, one of the most annoying and in-your-face of the tropes. I found that it spoiled the shows I was trying to enjoy. When a group of five, mercenaries, spies, soldiers etc, entered combat it was not suspenseful for me, because I could tell which guy was going to catch a bullet. These toxic tropes are just bad writing and initiatives like the Lexa Pledge can only help in stamping out these lazy and toxic ideas. I'm on board.
Labels: Sci-Fi