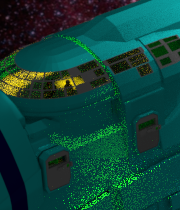 I have moved from the render engine that comes installed internal to Blender to using the snazzy new Cycles engine, but I'm struggling with it a little. Unfortunately, I'm having a lot of trouble getting used to the new lights.
They seem to leak through the walls of the spaceship so that internal lights create pools of illumination outside the hull. I'm not the only one who has noticed this either. This Blender Artists forum post mentions the same problem. The poster is told to use a shell modifier. OK, I'll do that, I thought. Unfortunately, "shell" is not on the list of modifiers that can be added to a mesh. So, once again, the people talking in these forums are assuming knowledge that I don't have. But, I know how to get it - Google! I found a video tutorial about the shell modifier in Blender and, right at the start, thankfully, he says that this modifier is called shell in Max, but solidify in Blender.
In the render above, you can see that light is gushing out of the cockpit of the spaceship, mostly in the form of fireflies. It looks to me like it is coming right through the walls, so this is definitely the before picture. I will now apply a "solidify" modifier, to see if that helps at all. It didn't.
I was very confused, until I took a closer look at my spaceship's mesh. I'd left a big triangular hole in it, which was where all the light was escaping from, oops! 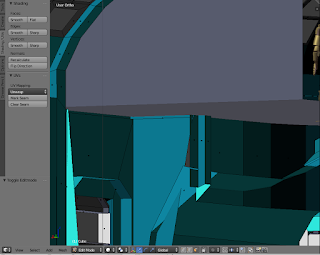 That, in my defense - hard to see, gray triangle, right at the center, that is a hole in the mesh.

Ha-ha, I thought. This is the reason the light is escaping my mesh. It has holes in it. All I have to do is stitch up the holes, and all will be well.

Unfortunately, things weren't quite as simple as that. Even with all the holes in the mesh stitched up, the light was still getting through. I reduced the number of lights I was using down to a single one, and still a few fireflies were tunneling through the wall.

I increased the size of the lamp, because this helps the render engine wok out where the light is from, apparently, still to no avail.
No matter what I did, I couldn't get the weird radioactive lighting to go away. I couldn't stop the rays penetrating materials, until I suddenly realized. Cycles is different. It doesn't even use lamps, it uses objects, like spheres and cubes with an emit light material.
Once I had worked that out, I could light the inside of the spaceship without the light spilling out. 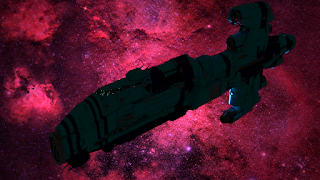 At last, I have the spaceship dark, with the light confined inside the cockpit. Now I just have to light the hull.
Labels: 3D Blender military Sci-Fi model