City of Dragons cover progress and with the text as well. 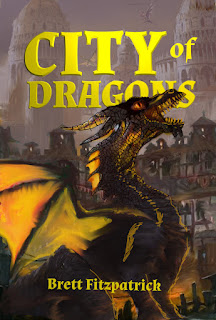 I have been working on the cover for City of Dragons. I'm in the middle of adding some definition to the vague dragon shape that presently dominates the center of the cover image.

It takes a long time, because each scale has to be pretty much drawn individually. It's quite a relaxing job, so I'm enjoying it, at least a little, but it does take time.

So far, the scales have only crawled down the dragon's neck, and there are no nice detailed scales on the creature's body. It'll take time, but it'll be worth it in the end.

All this work is done using GIMP, not Photoshop, or any of the proprietary options available. GIMP is a free and open-source raster graphics editor, used for image retouching and editing, resizing, cropping, photo-montages, converting between different image formats, and more specialized tasks. But it can also be used for free-form drawing and painting, which is what I'm doing.

The text comes from Blender, to give it that nice 3D effect. Blender, of course, is my other favorite software suite of free image creation tools. I just export a PNG from Blender and open it in GIMP as a layer, easy peasy.

As I was working today, the idea occurred to me to create two images and do a poll to see which one should be used on the front of the book. I'm not convinced it's a good idea though because, for one, probably I wouldn't get a lot of votes and, for another thing, I'm too much of a control freak to give up that much control.

I've also been working on the words that go on the inside of the book, and I'm approaching the half way point. The Westermere series of books is actually moving towards being a trilogy, at long last.